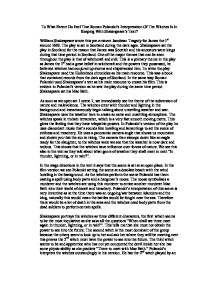 To What Extent Do Feel That Roman Polanski's Interpretation Of The Witches Is In Keeping With Shakespeare's Text?

To What Extent Do Feel That Roman Polanski's Interpretation Of The Witches Is In Keeping With Shakespeare's Text? William Shakespeare wrote this pre-eminent Jacobean Tragedy for James the 1st around 1603. The play is set in Scotland during the dark ages. Shakespeare set the play in Scotland for the reason that James was Scottish and his ancestors were kings during that time period in Scotland. One of the major themes that can be seen throughout the play is that of witchcraft and evil. This is a primary theme in the play as James the 1st had a great belief in witchcraft and the powers they possessed, he believed witches had conjured up storms and shipwrecked him. To write the play Shakespeare used the Holinsheds chronicles as his main resource. This was a book that contained records from the dark ages of Scotland. In the same way Roman Polanski used Shakespeare's text as his main resource to create his film. This is evident in Polanksi's version as he sets the play during the same time period Shakespeare set his Mac Beth. As soon as we open act 1 scene 1, we immediately see the theme of the subversion of nature and malevolence. ...read more.

I think this is a good idea as it shows you how malicious and spiteful the witches are, right from the beginning of the play. Further on in the scene as Mac Beth and Banquo are returning from battle they have their first encounter with the witches. Polanski has Mac Beth and Banquo riding through a storm, the storm gets so bad that they have to take shelter then as soon as they see the witches the rain stops. This shows the witches have used the weather to lure them in to their trap of equivocation and betrayal. Upon sight Banquo is astounded by the witches appearance: "so withered, and so wild in their attire, that they look not like th' inhabitants o' th' earth, and yet are on't?". The witches intrigue Mac Beth as he says, "speak if you can. What are you?". The witches give Mac Beth their prophesies 1st which "all hail Mac Beth, hail to the, Thane of Glamis" 2nd witch "all hail Mac Beth, hail to thee, Thane Cawdor" 3rd witch "all hail Mac Beth, that shalt be king hereafter!". Immediately he is won over as he states "Stay you imperfect speakers, tell me more". ...read more.

The image of Banquo mocking Mac Beth Symbolises Mac Beth's downfall and illustrates how he has killed for nothing. There is one more scene that the witches appear in, act 3 scene 5. However I believe as do many scholars that Shakespeare did not write this scene. I believe this as Mac Beth consists of a tightly woven plot and this scene does not further the plot in anyway. Also every other scene the witches have appeared in, they speak in trohain tetrameter and why all of a sudden would Shakespeare change this to iambic pentameter. I deem that this scene was merely wrote and added in at later date by a different writer. After comparing and contrasting Roman Polanski's film version of Mac Beth to that of the original text. I have come to the conclusion that in Polanski interpretation he has indeed kept very much in line with the text. Polanski has added an even more cathartic feeling to the end of the play than already exists by using the fight scene, which shows that even though Mac Beth knows he is defeated and is going to die he does not surrender and fights like a true hero to the death. The changes he made to his film furthered the excellence that the play already possesses and they were very innovative and creative. ...read more.