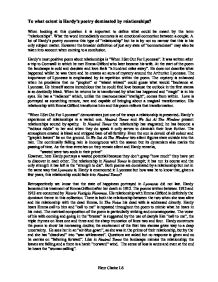 To what extent is Hardys poetry dominated by relationships?

To what extent is Hardy's poetry dominated by relationships? When looking at this question it is important to define what could be meant by the term "relationships". What the word immediately connotes is an emotional connection between a couple. A lot of Hardy's poetry concerns this type of "relationship" but he is by not so narrow that this is his only subject matter. However the broader definition of just any state of "connectedness" may also be taken into account when coming to a conclusion. Hardy's most positive poem about relationships is "When I Set Out For Lyonesse". It was written after a trip to Cornwall in which he met Emma Gifford who later became his wife. At the start of the poem the landscape is cold and desolate and love feels "a hundred miles away". He does not describe what happened whilst he was there and he creates an aura of mystery around the Arthurian Lyonesse. The importance of Lyonesse is emphasised by its repetition within the poem. The mystery is enhanced when he proclaims that no "prophet" or "wisest wizard" could guess what would "bechance at Lyonesse. He himself seems incredulous that he could find love because the outlook in the first stanza is so decidedly bleak. ...read more.

It is Hardy's first attempt to come to terms with the death of Emma and is written in the aftermath of her death. Unlike the death in After The Last Breath no sense of "numb relief"; unlike his mother's death Emma's death came relatively unexpected. The emotions are raw and the tone fluctuates between accusatory and remorseful. He asks why she gave "no hint" of her death which has "altered all". He accuses Emma of "indifference" but then goes on to regret their lack of communication before her death. Finally at the end of the poem resigns himself to the fact that "All's past amend". He says that her death has "[undone]" him and he is a "dead man held on end". Though their relationship before death was not particularly cordial her death has affected him deeply. Though relationships are a dominant theme in a lot of Hardy's poetry they are by no means the only theme. One subject which surfaces in nearly all of his poetry is the natural world. The natural world is used as a device to reflect emotions in, what T.S Eliot called, an 'objective correlative'. Hardy uses pathetic fallacy to illustrate the deep emotional connection he feels with nature. It could be argued that, in the broad sense of the word "relationship", these poems are in fact about relationships. ...read more.

The morals of the 19th century trouble Hardy quite deeply. In A Sunday Morning Tragedy he tells the story of a girl who falls pregnant outside wedlock. Her lover refuses to marry her and thus, in fear of the shame that would be cast upon her, she tries to abort her baby with a potion but dies. Hardy criticises the fact that her "plight" is "scorned in Christendie". A similar situation occurs in Tess of the D'Urbervilles and Hardy remarks that her shame is, "Based on nothing more tangible than a sense of condemnation under an arbitrary law of society which had no foundation in Nature." " Hardy advocates the "plight" of women who have to bare the brunt of such shame. In the poem the girl's mother declares, "O women! Scourged the worst are we...." One of the underlying subjects in Hardy's poetry is his agnosticism. In Hap he believes his life is dictated by "casualty" and not by the will of god. Hardy asks for a "vengeful" god; his view of the world is such that, if it were to be the product of any higher power, it is a ruthless one. He believes that random chance, or "hap", dictates his suffering. He explicitly links "pilgrimage" with "pain" through alliteration; he is referencing the sacrificial element of religion. Throughout the rest of the poems it is the lack of religion which remarkable. ...read more.