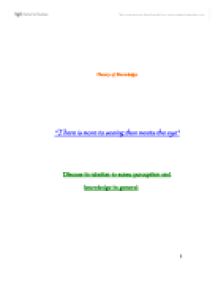 TOK - &quot;There is more to seeing than meets the eye&quot;. Discuss in relation to sense perception

“There is more to seeing than meets the eye”

Discuss in relation to sense perception and knowledge in general

“Were the eye not attuned to the sun, the sun could never be seen by it”. [1]

Sense Perception is an important concept. The way we interact and perceive the world is through using our five senses: seeing, listening, hearing, touching, smelling and tasting. They are our “windows of the world”[2] and are usually held to be the foundation of all our knowledge of the world around us. “Sense perception is the active, selective and interpretive process of recording or becoming conscious of the external world”[3] and helps us claim and acquire knowledge. However distortion and corruption of these senses can lead to false perception of the world as Goethe argues above, “Were the eye not attuned to the sun, the sun could never be seen by it”.

Anatomically there are two perception parts of the brain each having a different function. The primary visual cortex is involved in receiving images directly from the “eye”. The secondary visual cortex, using higher order functioning, makes sense of all visual images. This part is heavily influenced from external factors, which are out of our control, such as societal norms. There are many examples of how pre-held judgements can influence strongly what we “see” and thus showing that “There is more to seeing than meets the eye” – for seeing is an association that the perceiver understands.

As previously mentioned perception is not just visual perception, it is general perception; auditory perception, sight perception, touch perception, taste perception and smell perception. But there is more to perception than just senses. We live in a society nowadays where we hold prejudices and prejudgments against not only other human beings but as well as our thoughts and imaginations.

Our fives senses are reliant upon sense-organs in our bodies, which are stimulated by varying forms of energy in the world. However for many other animals the situations is drastically varied. For example dogs rely upon smell more than sight illustrating that dogs would rather be blind than have no smell compared to humans would rather be deaf than have no hearing.. What one thing humans automatically believe is that because we see some object that the person next to us is seeing it in the exactly the same way.

However, what we see is also based upon our culture upbringing, our language and the society we live in but more importantly it is our past experiences that enables us to see more than what meets they eye. For example, in some cultures it is rude to look people in the eye, whereas in the culture where we live it is considered courteous and well-mannered. This can be further seen through our education. A noteworthy example can be seen by that a builder would see something different to a biologist. For the builder would simply see a tadpole, whereas the biologist would perceive a totally different concept – he may see the structure of the tadpole, its life cycle and its characteristics. Thus showing that there is more to seeing than meets the eye.

Above examines how sight helps us see more than what meets the eye. However there is more than just one sense that enables us to do this. Auditory perception is paramount, for one is able to hear the point being made but not necessarily be able to “see” or understand and comprehend the argument being made.

Furthermore, touch and smell and taste are just as important perceptions in order for someone to see more than meets the eye. This is the case for example in science. A scientist may see a reaction take place, but may not necessarily be able to understand and comprehend to full extent without toughing, smelling and in rare cases tasting the substance. For if the scientist was to touch the experiment, he or she would be able to perceive whether it is an exothermic or endothermic reaction, by smell the substance would be able to determine if it a pungent gas or maybe even a noble gas and by taste it would be able to determine what type of state it is in. It is through this example that it is evident that with sense perception there is more to seeing than meets the eye.

On the other hand, a minor point is that we cannot totally depend upon our sense show to us there is more to seeing than meets the eye. This is evident thought illusions, hallucinations, personal opinions and points of view. For example, a man in the desert may see an oasis. This shows that there is more to seeing than meets the eye for our perception “depends not only on the input available to us from the outside world, but also upon the attention we pay to it” and more importantly is that we “see” things differently depending on the environment the perceiver is in and what precedes and surrounds that which we perceive.

Humans are prone to illusions when our perception is distorted, also prone to hallucinations, when we see things which are not there at all.  The existence of the distortions of our sight perception show to us that the thought and interpretation are themselves part of the process of perception.

Through our five senses of sight, smell, hear, touch and taste and their perceptions we able to understand that there is more to seeing than meets the eye for in this instance “see” and “eye” are used as a metaphor as understanding and comprehending something. And through the examples previously mentioned it portrays that seeing is a way to knowledge and is an association that the perceiver is able to understand, with past experiences, cultural upbringings and various societies enabling us to “see” something different to the person who is looking at the same object. As C. W. Leadbeater remarked “It is one of the commonest of mistakes to consider that the limit of our power of perception is also the limit of all there is to perceive”[4].