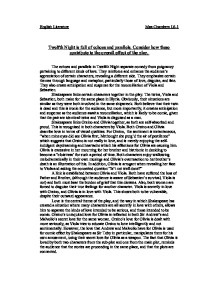 Twelfth Night is full of echoes and parallels. Consider how these contribute to the overall effect of the play.

English Literature Max Chambers L6-1 Twelfth Night is full of echoes and parallels. Consider how these contribute to the overall effect of the play. The echoes and parallels in Twelfth Night separate comedy from poignancy pertaining to different kinds of love. They reinforce and enhance the audience's appreciation of certain characters, revealing a different side. They emphasize certain themes through language and metaphor, particularly those of love, disguise, and fate. They also create anticipation and suspense for the reconciliation of Viola and Sebastien. Shakespeare links certain characters together in the play. The twins, Viola and Sebastien, both make for the same place in Illyria. Obviously, their situations are similar as they were both involved in the same shipwreck. Both believe that their twin is dead and this is ironic for the audience, but more importantly, it creates anticipation and suspense as the audience await a reconciliation, which is likely to be comic, given that the pair are identical twins and Viola is disguised as a man. Shakespeare links Orsino and Olivia together, as both are self-absorbed and proud. This is recognised in both characters by Viola. Both Orsino and Olivia describe love in terms of visual qualities. ...read more.

The fact that Olivia is loved by both two characters from the sub-plot and one from the main plot, reminds the audience that the stories are proceeding in the same place, and that the plots are connected. The theme of disguise is one which dominates the play throughout. Viola both disguises herself as a woman, and disguises her true feelings for Orsino. Likewise, Olivia disguises her love for Viola. This theme is extended by Shakespeare when it is revealed that Sebastien went under the alias of Roderigo whilst he was being aided by Antonio. The purpose of this is unclear, though Shakespeare may simply be emphasising that disguise is a facet of human nature. The structure of the play creates parallels. In particular, Act One Scene Two echoes Act Two Scene One. The scenes are almost identical, with both Viola and Sebastien arriving in Illyria. The almost duplicate scenes increase anticipation of the future reconciliation, and the extended conversation between Antonio and Sebastien, and the fact that Antonio is named, causes the audience to expect Antonio to make another appearance later in the play. In addition, Act One Scene Four mirrors Act Two Scene Four, with Orsino and Viola discoursing about his love for Olivia. ...read more.

Olivia says of Viola, "Methinks I feel this youth's perfections With an invisible and subtle stealth To creep in at mine eyes." These references cause the audience to recognise that the feelings of these two characters are largely shallow and superficial. In addition, the echo created by "Illyria," where the play is set, and "Elysium," the Greek term for heaven, shows the richness of poetry and also illustrates that Illyria is a kind of fantasy world. We are reminded that it is not of this world. The echo created by the references to love being like an illness reminds us that love can have negative effects. Olivia calls love "the plague" and the emotion has made Orsino ill. Orsino associates the appetite for food with the appetite for love and relates overeating to lust. This again ties in with Orsino and Olivia's pre-occupation with appearances in matters of love. Orsino talks about the sea with relation to the size of his love for Olivia, demonstrating his arrogance. This draws a parallel to the shipwreck from which Viola and Sebastien have been involved in. This theme of the sea is echoed again when in Act One Scene Two, the Captain refers to the myth of Arion and the Dolphin, which suggests to the audience that Sebastien might well be alive, and creates anticipation of a future reconciliation. ...read more.