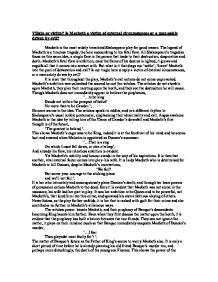 Villain or victim? Is Macbeth a victim of external circumstances or a man solely driven by evil?

Villain or victim? Is Macbeth a victim of external circumstances or a man solely driven by evil? Macbeth is the most widely translated Shakespeare play for good reason. The legend of Macbeth is a timeless tragedy, the hero succumbing to his fatal flaw. All Shakespeare's tragedies focus on this same idea; a single flaw in the person that leads to their destruction, desperation and death. Macbeth's fatal flaw is ambition, once the flame of his desires is lighted, it grows and engulfs all that it comes into contact with. But what is it that drags our 'noble', 'brave' Macbeth into the pool of devastation and evil? Is our tragic hero simply a victim of external circumstances, or a man solely driven by evil? It is clear that throughout the play, Macbeth's evil actions do not come unprovoked. Macbeth's ambition was unleashed the second he met the witches. The witches do not stumble upon Macbeth, they plan their meeting upon the heath, and they see the destruction he will cause. Though Macbeth does not immediately appear to believe the prophecies, '...to be king Stands not within the prospect of belief No more than to be Cawdor.', He soon warms to the idea. The witches speak in riddles, and in a different rhythm to Shakespeare's usual iambic pentameter, emphasising their abnormality and evil. ...read more.

Once they have adequately confused Macbeth they disappear (from the heath and from their cave), and this continues to show the strength and supremacy they behold. Indeed, without the witches, Macbeth may never have been enlightened to the prospect of being King, and would have lived a happy, undisturbed life as Thane of Glamis and Cawdor. Consistently through the book, personification is used as a form of conveying great evil, 'Fortune, on his damn�d quarrel smiling', 'Sleep, that knits up the ravelled sleave of care', 'Treason has done his worst', are all factors- neither within Macbeth nor external- that are shown evilly throughout the book. By using personification, Macbeth has made these things more important and powerful, quite like extra external factor's that Macbeth has to fight. It makes the whole play more evil, treason, sleep and death, all up against Macbeth in this great fight. It increases the sense of evil and terror. However, perhaps he would not. Perhaps Macbeth was destined for this path. Did Macbeth have all the evil he needed to commit these massacres within him already? There is certainly a strong argument that he did. The witches choose Macbeth. They see something in him which they exploit and ripen, they do not put a spell on Macbeth, they simply awaken him and he feeds on their words. ...read more.

He acknowledges their power. And it is this evil power that I believe made Macbeth the victim here. He was corrupted by circumstances beyond his control, and as a result of this, became the villain that has long been remembered. In all of us, I think we can find a part of us that does feel sorry for Macbeth, for it deals with issues close to our hearts. We all have ambition, so we can acknowledge his temptation. Perhaps if people related it more to their lives and decreased the importance of the situation it would be easier to understand. It may be a job or promotion rather than the crown that people desire, but what lengths would they go to, to achieve their lifelong ambitions? I don't know about mine, because they have never been offered to me, but if they were, would I be ruthless like Macbeth? Very possibly, and this is why we can all empathise with him, because in us, we can semi-understand his plight. Indeed we can pity Macbeth for what he has become. But we cannot pardon him. It is clear throughout the play that Macbeth has evil within him, and though others may corrupt him, he still acts with his head and his heart without being forced. All in all, my belief is that Macbeth is both the villain and the victim, an intricate mix of internal and external factors which concocted this spiral of deceit, decline and destruction. Eimear MacGarty ...read more.

This essay offers a thoughtful and at times subtle account of Macbeth's development in the play, and it makes a determined and effective effort to answer the question set. Another strength is its engagement with the play, but at times it is too personal in tone.
Accurate use of the apostrophe is expected at 'A' level.
****