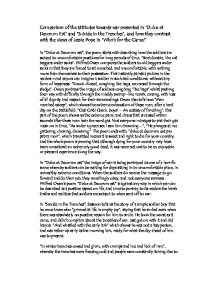 Comparison of the attitudes towards war presented in “Dulce et Decorum Est” and “Suicide in the Trenches”, and how they contrast with the views of Jessie Pope in “Who’s for the Game?”

In "Dulce et Decorum est", the poem starts with describing how the soldiers are subject to uncomfortable positions for long periods of time, “Bent double, like old beggars under sacks”. Wilfred Owen compares the soldiers to old beggars under sacks in that they are forced to sit crouched, and uncomfortable, with nothing more than themselves to their possession. This instantly paints a picture in the readers mind as you can imagine a soldier in such bad conditions, without any form of happiness. “Knock-Kneed, coughing like hags, we cursed through the sludge”. Owen portrays the image of soldiers coughing “like hags” whilst pushing their way with difficulty through the muddy swamp-like marsh, cursing, with loss of all dignity and respect for their surroundings. Owen also tells how “Men marched asleep”, which shows the extreme exhaustion of these men, after a hard day on the battlefield. “Gas! GAS! Quick, boys! – An ecstasy of fumbling”, this part of the poem shows us the extreme panic and chaos that is caused within seconds after these men hear the word gas. Not everyone manages to put their gas mask on in time, “As under a green sea I saw him drowning…”, “He plunges at me guttering, choking, drowning.” The poem ends with, “dulce et decorum ext pro patria mori”, which translated means it is sweet and right to die for your country, and the whole poem is proving that although dying for your country may have been considered an extremely good deed, it was never set out to be an enjoyable or pleasant experience along the way.

In "Dulce et Decorum est" the image of war is being portrayed as one of a horrific scene whereby soldiers can be waiting for days sitting in an uncomfortable place, in unhealthy extreme conditions. When the soldiers do receive the message to go forward and do their job, they unwillingly obey, and not everyone survives. Wilfred Owen’s poem "Dulce et Decorum est" is against any way in which war can be described as a positive aspect on life, and aims to portray to its readers the harsh truths and realities that soldiers are subject to when sent off to war.

In "Suicide in the Trenches", Sassoon tells us the story of a simple soldier boy that he once knew who “grinned at life in empty joy”, saying that he smiled even when there was absolutely no positive reason for him to smile. He took the worst as it came, and didn’t complain about the troubles of war, just got on with it and did his job. “And whistled with the early lark” which shows he was not a lazy person, and was rather up early as the morning lark, ready for what the day ahead of him was to present.

“In winter trenches cowed and glum, with crumps and lice and lack of rum”, whereby the trenches were freezing cold and people were constantly itching due to lice, and lack of the one thing that kept the soldiers going, the one thing they looked forward to, the rum that kept them warm and merry, and kept their spirits high when they could be no lower. “He put a bullet through his brain, no one spoke of him again”, he committed suicide.

I think that the purpose of this poem is to show that even of the most humble, happy people who will take life as it comes, no matter what gets thrown at them, are still pushed over the edge by the extreme living conditions of soldiers and are forced to put an end to their lives and their misery.

In "Who's For the Game" the atmosphere of war is portrayed very differently. “Who’s for the game, the biggest that’s played”, in the first line war is being referred to as a “game”, which as seen by the previous two poems is a very naïve statement. “The red crashing game of the fight?”, the colour red being used to indicate bloodshed in a mild and meaningless way. “Who’ll grip and tackle the job unafraid, and who thinks he’d rather sit tight?”. This part of the poem asks the question of who will go to battle “unafraid”, which would appeal to a man’s ego of being afraid of nothing. The question also contains a negative statement, “who thinks he’d rather sit tight”, asking for those who are not manly enough to go to war and due to a man’s ego not wanting him to be humiliated, no one would answer that call. “Who would much rather come back with a crutch, than lie low and be out of the fun?” This question makes losing a leg sound meaningless, and life wouldn’t be very different without it anyway, even though this is, unfortunately not the truth. This line also talks about missing out on the “fun” of war, as if the icy cold conditions, with injuries, death, and cold blooded murder all around you, were the general enjoyments of a man.

In the forth verse, a negative question is asked, “Come along lad’s but you’ll come on all right”, whereby this puts a soldier in an uncomfortable position where he is unable top say no, and that was often the case. “Your country is up to her neck in a fight, and she’s looking and calling for you.” here Jessie Pope refers to the country as a female in distress, calling and looking for the soldier, which would have appealed naturally to male soldiers. I feel that Jessie Pope is trying to goad men into joining the army and going out to battle, by

In conclusion I feel that "Who's For the Game" portrays war as being a good thing, an object of fun, and the correct thing to do, regardless of what injuries may be caused along the way. I feel that this is a completely insensitive poem that would upset readers who have themselves, or know others that have been hurt, injured or killed in the war. I feel that "Suicide in the Trenches" and "Dulce et Decorum est" portray the realities of war, the truths that are not told in "Who's For the Game", the truths that war is not by any reasoning a good thing, and neither is it a leisurely activity that any man should want to participate in.