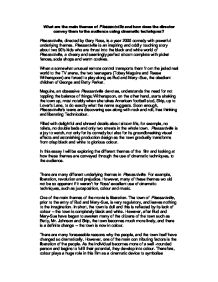 What are the main themes of Pleasantville and how does the director convey them to the audience using cinematic techniques?

What are the main themes of Pleasantville and how does the director convey them to the audience using cinematic techniques? Pleasantville, directed by Gary Ross, is a year 2000 comedy with powerful underlying themes. Pleasantville is an inspiring and oddly touching story about two 90's kids who are thrust into the black and white world of Pleasantville, a cheery and seemingly perfect sitcom complete with picket fences, soda shops and warm cookies. When a somewhat unusual remote control transports them from the jaded real world to the TV arena, the two teenagers (Tobey Maguire and Reese Witherspoon) are forced to play along as Bud and Mary-Sue, the obedient children of George and Betty Parker. Maguire, an obsessive Pleasantville devotee, understands the need for not toppling the balance of things; Witherspoon, on the other hand, starts shaking the town up, most notably when she takes American football stud, Skip, up to Lover's Lane, to do exactly what the name suggests. Soon enough, Pleasantville's teens are discovering s*x along with rock and roll, free thinking and liberating Technicolour. Filled with delightful and shrewd details about sitcom life, for example, no toilets, no double beds and only two streets in the whole town. Pleasantville is a joy to watch, not only for its comedy but also for its groundbreaking visual effects and astonishing production design as the town gradually transforms from crisp black and white to glorious colour. In this essay I will be exploring the different themes of the film and looking at how these themes are conveyed through the use of cinematic techniques, to the audience. There are many different underlying themes in Pleasantville. For example, liberation, revolution and prejudice. However, many of these themes would not be so apparent if it weren't for Ross' excellent use of cinematic techniques, such as juxtaposition, colour and music. One of the main themes of the movie is liberation. ...read more.

They show the struggle between the races and the objection to change harboured by the traditionalists. Therefore, there is a plethora of cinematic devices used by Ross in these scenes. As aforementioned, tracking shots are used. However, more importantly, slow motion shots are a main feature of these scenes. For example, while the soda shop is being overturned there are slow motion shots highlighting the importance and drama of this twist in the story. These shots are particularly effective in leaving no doubt in the audience's mind that the riots are extremely substantial within the movie and are going to lead to many different means of consequence. Also during the riot scenes, hand held cameras are used, in order to highlight the franticness of the people. These hand held cameras often provide jagged and imperfect shots, which is exactly what was required for such a scene. The nature of the shots reflect irrevocably the sentiments of the citizens of the town, in that they are not sure what is happening and everything is not straight forward and slow moving, like the previous camera angles and devices used. Aside from camera angles, other cinematic techniques are used to highlight the dramatic nature of the scenes. For example, music once again is used during the riots. For a fairly substantial period of time, during the slow motion scenes, the sound of the riots are faded almost to silence, with only large crashes, such as the bench being propelled through the soda shop window and the juke box being destroyed being audible. Over the top of these crashes, a slow, dramatic and depressing tune filters over the scenes of chaos. This music offers a stark contrast to the melodic Bee-Bop and the full of prospect Rock and Roll that was used earlier in the film. This music also helps in registering to the audience that this is a sad and altering situation that cannot be overridden - things will not be the same again. ...read more.

If the audience notices this, they will instantly register that all is not well. Next, George repeats himself, and again there is a crash of lightning. Here, it is also noticeable that George has a huge shadow that looms large and sinister behind him, very impressively, yet very evilly. Once again, this shadow was not there on previous occasions. This is another cinematic technique shown by Ross, symbolising change. Finally, the scene shifts to a colour scene, which is another example of juxtaposition between black and white and colour, which again symbolises change. After this sequence of events, it is clear that things will never be the same again for George. A few scenes later, George is seen stumbling into the bowling alley, hair out of place and a look of distant confusion and bewilderment on his face. It is now that the fundamentalists form their party and essentially the riots begin. This is just one example of how important change is within the movie. However, change is the crux of the production, it is what the whole movie regards - change and adjustment. The cinematic techniques used to symbolise change in this scene alone, such as the thunder and lightning and the sinister shadows are astonishing, and convey to the audience precisely what was intended. Overall, there are many themes to Pleasantville. Such as, the quest for knowledge, the strive for happiness, the freedom of expression, the need for self-confidence, r****m, prejudices, appreciation, becoming more well rounded, liberation, unity, revolution, new beginnings, acceptance, freedom, the loosening of stereotypes, fulfilling potential and the juxtaposition between perfect and imperfect worlds. However, the main theme of Pleasantville is change, and how it is dealt with. The director, Gary Ross uses many cinematic techniques, such as characterisation, the use of colour and black and white, the exploration of journeys, camera angles and in particular tracking and low angled shots, juxtaposition and the use of music. These techniques are all used to convey the main themes, and are done so at certain stages in the film, such as scene 28 masterfully without falter. ...read more.