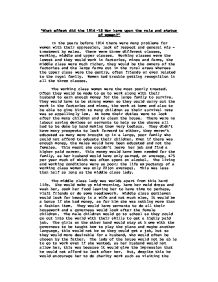 "What effect did the 1914-18 War have upon the role and status of women?" In the years before 1914 there were many problems for women with their oppression, lack of respect and general mis- treatment by males. There were three different classes, working, middle and upper classes. Working classes were the lowest and they would work in factories, mines and farms, the middle class were much richer, they would be the owners of the factories and the large farms out in the rural areas whereas the upper class were the gentry, often friends or even related to the royal family. Women had trouble getting recognition in all the three classes. The working class women were the most poorly treated. Often they would be made to go to work along with their husband to earn enough money for the large family to survive. They would have to be strong women so they could carry out the work in the factories and mines, the work at home and also to be able to give birth to many children as their survival rate was so appallingly low. At home their duties were to look after the many children and to clean the house. There were no labour saving devices or servants to help so the chores all had to be done by hand making them very tedious. They didn't have many prospects to look forward to either, they weren't educated as many were brought up in a large, poor family who could not afford to educate their children. Even if there was enough money, the males would have been educated and not the females. This meant she couldn't leave her job and find a higher paid career. This money would have been needed for the family, as her husband would have only earned, on average, �75 per year much of which was often spent on alcohol. The living and working conditions were so poor; the life expectancy of a working class woman was only 22(on average). ...read more.

They were not treated any differently to the men that were doing the same job. Extract from Elizabeth, Baroness de T'Serclaes autobiography. "We slept in our clothes and cut our hair short so that it would tuck into our caps. Dressing meant simply putting on our boots in the morning......... There were times when we had to scrape lice off our clothes with the blunt edge of a knife and our underclothes stuck to us." This shows that they were treated the same and with that had to suffer the same hardships that the men had too. The wards they worked in were noisy from the screams of men and gramophones. Definitely not the way the fairy tales portrayed them. One negative point for the women who had signed up was that they didn't actually know what was going on at the front and it gave them a lot of time to think. In 1917 many soldiers were lost in the big battles. The generals were getting worried that they would run out of men. To make sure they didn't they needed to recruit the men that were doing all the 'soft jobs' to the front line, but they needed people to replace them. For this they set up the WAAC, Women's' Army Auxiliary Corps. The plan was for these women to do all the menial but necessary jobs, such as, cooking, cleaning, waitressing, secretarial work and also to instruct the public how to put on a gas mask. They were given ranks to keep the structure an uniforms were also issued, a tight khaki cap, khaki jackets and skirts which had to be no more than 12 inches from the ground. Despite this the women in the WAAC were not given full military status. The women enrolled rather than being enlisted therefore were not to be punished by a military court but a civil one. ...read more.

* 1919-This was the year of the first female MP to sit in on a parliament session. Lady Nancy Astor. The first was Countess Markowicz, but she did not sit in on the parliament. Also this was the year that the sex disqualification act was brought in so the women could not be sacked from their jobs for being pregnant for example. * 1923-Equal rights in the divorce proceedings. This gave the women more of a chance if they ever were to get divorced, where before the war everything went to the husband. * 1925-Another opportunity opened for the women, the civil service started to accept women. * 1928-In 1918 some middle-class women were given the vote but now there were full voting rights for everyone over 21. This is what they had campaigned for, for so long. * 1930-It was the first time that contraception advice was given to women. This shows that things were changing in the favour of women in Britain. A survey was done in Southampton after the war. It surveyed what type of work women had been doing during the war and what they were doing now that the war was over. Here are some of their findings. Names War Work Work After the War Mrs Bell Farm worker Domestic service Mrs Gregory Pirelli Factory Domestic service Mrs Stone Engineer at avro Domestic service Mrs Mullins Government mill Nurse on a liner Mrs Brady Munitions factory Dress-making Mrs Kilford Office work Office work Mrs Darnet Telephone operator House wife Mrs Hayes Transport worker Cleaner Mrs O'Howey Van driver Van driver This table shows that not all women were given their jobs back after the war but some kept them. Overall I think that the war had a major affect on the role and status of women. It may not have been instant but it set the grounding for everything to come. It showed to all the men in the country that they were just as good as them and should be given the same opportunities and respect from them. ...read more.