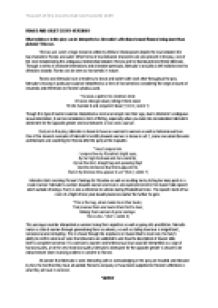 What evidence in the play can be interpreted as Mercutios affections toward Romeo being more than platonic?

﻿Thuy-Anh LE [the one who shall rule the world] 10.09 ROMEO AND JULIET ESSAY- VERSION 1 What evidence in the play can be interpreted as Mercutio?s affections toward Romeo being more than platonic? Discuss. ?Romeo and Juliet? a tragic romance written by William Shakespeare depicts the love between the two characters Romeo and Juliet. Other forms of love between characters are also present in the play, one of the most notable being the ambiguous relationship between Romeo and his flamboyant best friend Mercutio. Through a series of character interactions and character portrayals, Mercutio?s sexuality is left indistinct and his affections towards Romeo can be seen as homoerotic in nature. Romeo and Mercutio have a tendency to tease and banter with each other throughout the play. Mercutio?s teasing in particular could be interpreted as a form of homoerotism considering the large amounts of innuendo and references to Romeo?s phallus used. ?To raise a spirit in his mistress' circle Of some strange nature, letting it there stand Till she had laid it and conjured it down;? (Act 2, scene 1) Though this type of banter could be interpreted as normal amongst men their age, due to Mercutio?s ambiguous sexual orientation, it can be considered a form of flirting, especially when you take into consideration Mercutio?s attestment for the opposite gender and love between a man and a woman. ...read more.

?NURSE If you be he, sir, I desire some confidence with you. ? MERCUTIO A bawd, a bawd, a bawd! so ho! ROMEO What hast thou found? MERCUTIO No hare, sir; unless a hare, sir, in a lenten pie, that is something stale and hoar ere it be spent. An old hare hoar, And an old hare hoar, Is very good meat in lent But a hare that is hoar Is too much for a score, When it hoars ere it be spent. Romeo, will you come to your father's? we'll to dinner, thither.? (Act 2, Scene 4) In this scene, Mercutio is shown to immediately interrupt the conversation between the other two characters once Romeo has lost interest in teasing the nurse, and the nurse has shown interest in conversing with him in private. Mercutio?s insults and teasing become bawdier as he tries to draw the groups attention and in turn Romeo?s attention towards him rather than the nurse as he continues to mock her. This act could be seen as an adverse reaction to the possibility of Romeo romancing another woman, or even the possibility of him romancing the nurse herself. A similar attitude is taken up by Mercutio concerning other women in Romeo?s life, as shown with Rosaline. The callous and unseemly way that Mercutio treats women who associate with Romeo could be seen as a form of jealousy, and thus his possible homoerotic affections ...read more.

Said references to Romeo's phallus appear when Mercutio, in an attempt lure Romeo out of hiding, begins to talk of Romeo raising 'a spirit in his mistress' circle' and 'letting it there stand / Till she [Rosaline] had laid it and conjured it down' (William Shakespeare, Romeo and Juliet, Act 2, Scene 1, Line 26). Though this type of banter could be interpreted as normal amongst men their age, due to Mercutio?s ambiguous sexual orientation it can be considered a form of flirting, especially when you take into consideration Mercutio?s attestment for the opposite gender and love between a man and a woman Early on in the play, Mercutio is shown to have and aversion to women as well as heterosexual love. One of the clearest examples of Mercutio?s hostility towards women is shown in when Benvolio and Mercutio are searching for Romeo after the party at the Capulets. Mercutio starts mocking Romeo?s feelings for Rosaline as well as insulting her by listing her body parts in a crude manner. He describes her ' fine foot, straight leg and quivering thigh' (Act 2, Scene 1, Line 21) amongst other body parts considered uncouth to talk about during his time period. Mercutio?s aversion towards women and love is also quite prominent in his Queen Mab speech which outside of being a ?fairy? is also a reference to whores during Elizabethan times. The speech starts off as more of a flight of fancy but steadily becomes darker the further he gets. ...read more.