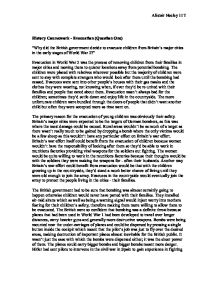 &quot;Why did the British government decide to evacuate children from Britain's major cities in the early stages of World War 2?&quot;

History Coursework - Evacuation (Question One) "Why did the British government decide to evacuate children from Britain's major cities in the early stages of World War 2?" Evacuation in World War 2 was the process of removing children from their families in major cities and moving them to quieter locations away from potential bombing. The children were placed with relatives wherever possible but the majority of children were sent to stay with complete strangers who would look after them until the bombing had ceased. Evacuees were sent into other people's houses with their gas masks and the clothes they were wearing, not knowing when, if ever they'd be re-united with their families and people that cared about them. Evacuation wasn't always bad for the children; sometimes they'd settle down and enjoy life in the countryside. The more unfortunate children were bundled through the doors of people that didn't want another child but often they were accepted more as time went on. The primary reason for the evacuation of young children was obviously their safety. Britain's major cities were expected to be the targets of German bombers, as this was where the most damage could be caused. ...read more.

It wasn't just the ease with which the bombs were dispersed either; it was the sheer power of them. The planes could carry bigger bombs and bigger bombs meant more danger. Hitler had sent pilots to intervene in the civil war in Spain to gain experience in fighting in a war-time environment. The British pilots only had experience of flying in a peace-time environment, so in many cases they wouldn't really know what to expect when they flew over German cities for the first time which would be quite off putting for their first few flights and could force errors to be made. The Spanish civil war was also significant because it left absolutely no doubt that the destructive power of the German Luftwaffe was an enormous threat. The threat of the Luftwaffe was also coupled with Germany's new tactics - blitzkrieg. The blitzkrieg tactic basically meant "lightening war" and was a concept original devised by a German army officer called Hans Guderian. The tactic was then later adopted by Hitler and used to devastating effect against Czechoslovakia and Poland which demonstrated the potential danger faced by Britain once more. ...read more.

Children were also needed to survive because as soldiers were killed they needed replacements and without children who would they be? The next generation were being relied on heavily and were being brought into fighting as soon as they were old enough. If they'd been in the cities they would've most likely been killed or seriously injured during an air raid and wouldn't ever have able to fight for their country, again meaning a loss of the war for Britain. The British government was nearly ready for war in 1939 because war plans were drawn up in 1936 and gave the country three years of preparation. Included in these war plans were individual plans for the evacuation of young children. These plans were so effective they meant that evacuation could begin even before the war was officially declared. I believe that the British government certainly did the right thing in evacuating children from the country's major cities. It may not have pleased parents immediately after the decision was made but in the long run they'd see that it was best for the safety of their children. Without evacuation, Britain's morale and conscription levels would have been rock bottom. I believe that evacuation was one of the factors that lead to Britain's victory in the Second World War. Alistair Heeley 11T ...read more.