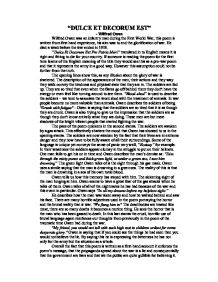 "DULCE ET DECORUM EST" - Wilfred Owen Wilfred Owen was an infantry man during the First World War, this poem is written from first hand experience, his aim was to end the glorification of war. He died a week before the war ended in 1918. "Dulce Et Decorum Est Pro Patria Mori" translated in to English means it is right and fitting to die for your country. If someone is reading the poem for the first time learns of the English meaning of the title they would see this as a pro-war poem and that it represents the army in a good way. However this assumption could not be further from the truth. The opening lines show this, as any illusion about the glory of war is shattered. The description of the appearance of the men, their actions and they way they walk convey the tiredness and physical state that they are in. The soldiers are fed up. They are so tired that even when the flares go off behind them they don't have the energy or even feel like turning around to see them. ...read more.

By saying this he is expressing the bitterness he has not only for the army but the situation as a whole. Overall the fact that this poem is written as a first-hand account it enforces the poem's message, that the propaganda spread about the war is a lie and consequentially that the government are liars and that we the public are quite gullible for believing it. "THE CHARGE OF THE LIGHT BRIGADE" -Alfred Lord Tennyson We are told that Tennyson wrote this poem after reading the description in 'The Times' of the Battle of Balaclava in 1854, during the Crimean War. He was a civilian poet so he was not writing as a first hand witness. This poem increased the morale of the British soldiers fighting in the Crimean War and of the people at home. Tennyson�s poem is a celebration of the bravery of the six hundred British troops who went into battle against all odds, even though they knew that they would be killed. The poem starts in the middle of the action. "Half a league, half a league Half a league onward." ...read more.

Tennyson�s poem is a celebration of the bravery of the six hundred British troops who went into battle against all odds, even though they knew that they would be killed. Tennyson's message is flawed, as he himself was not present at the battle and that he was not even a soldier. His only evidence of the battle is from reading a report from 'The Times' newspaper and much of his poem could be just his imagination running wild. Owen�s poem, on the other hand, might almost have been written as a challenge to Tennyson�s rousing and jingoistic sentiments. Wilfred Owen in his poem is asking us to question all the certainties that Tennyson is celebrating. The theme of "Dulce et Decorum Est" is that war and dying for one's country are not at all not glorious. As Owen's poem is a first-hand account it has more of an impact to the reader. Each poet uses different techniques to display their message: Owen uses similes, metaphors and numerous horrific adjectives to describe the events of the war; and Tennyson uses rhythmic verse, repetition, alliteration and onomatopoeia. To me Owen's poem is the best at reflecting the poet's feelings and intentions, his portrayal of brutality accurately reflects our feelings. Tennyson's message in effect rings hollow after reading Owen's poem. James McLoughlin 12M ...read more.