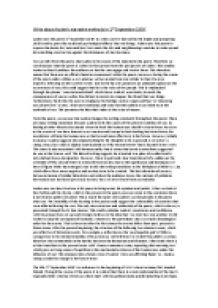 ﻿Write about Auden?s narrative methods in ?1st September 1939? Auden uses the poem ?1st September 1939? to write a sort?ve farewell to the bright and prospering 1930?s and to greet the social and psychological affects that war brings. Auden uses this poem to express the desire for ?universal love? but wants the USA and neighbouring countries to wake up and do something constructive against the dominance of n**i Germany We can infer from the poem, that Auden is the source of the material in the poem. Therefore we can denounce that the poem is written in first person from the perspective of Auden. This enables Auden to directly address the audience so that he can engage and involve them. This therefore means that there are no official characters announced within the poem. However, during the course of the poem Auden utilises a very plain as well as neutral tone one similar to that of a news reporter, reflecting on the current events. Due to the fact, he possesses an unbiased opinion on the occurrences of war; this could suggest that he is the voice of the people. ...read more.

Due to this the setting transitions to the birthplace of Hitler i.e. Linz which allows for a more negative and anxious tone to be created. The fast alteration of scenery between stanzas of similar historical events allows the audience to see the vastness of problems the human race has faced previously to show how we never learn from our mistakes. Auden uses no clear structure in his poem to bring across his opinions and points. When we look at the rhythm and the rhyme, which is the present in the poem, one can come to the conclusion there is no trend or pattern involved. This is much the same with Auden?s work especially in the poem Miss Gee. The instability of the rhyming in the poem could suggest the vulnerability of countries that were affected during the war. The only clear structure and uniformity of the poem, which is shown, is presented through the 11 line stanzas. This could symbolise Auden?s consistence and confidence with his perspectives on war and strongly believes in the idea that ?we must love one another or die? I order to stop the corruption of humanity. ...read more.

Furthermore, Auden uses Americanisms i.e. ?blind skyscrapers? to emphasise the fact that America is remaining neutral in the times of war, turning a blind eye to the desperation and struggle happening in Europe. This idea is expressed again through ?euphoric dream? which is an emphasis of the fact that America seem to be drugged as they are avoiding war altogether, which is dissimilar to America?s theory of confrontation. However, Auden seems to utilise a negative and haunting tone through the stanzas, criticising war and the destruction it brings and suggesting it is a lot easier to evade war than start it. He uses the idea that commuters have to ?cling? onto their jobs and their everyday lives, as economically and socially people become unstable with war. This contrasts with the notion that commuters have to ?repeat their morning vow? as a compulsory order to humanity, oblivious to the detrimental affects of war. The idea Auden is trying to represent is America believes turning a blind eye to war and being in ?neutral air? is the best way to act. However, Auden believes that showing an ?affirming flame? and having ?universal love? will stop the future occurrences of war. ...read more.