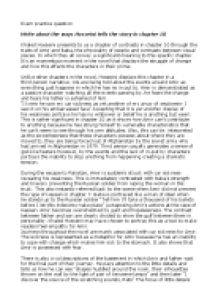 ﻿Exam practice question Write about the ways Hosseini tells the story in chapter 10 Khaled Hosseini presents to us a chapter of contrasts in chapter 10 through the traits of Amir and Baba, the physicality of people and contrasts between visual places. In which they all convey a significant meaning to this specific chapter. It's an momentous moment in the novel that displays the struggle of change and how this effects the characters in their prime. Unlike other chapters in the novel, Hosseini displays this chapter in a third person narrative. We are being told about the events around Amir as everything just happens in which he has no in put to. Amir is demonstrated as a passive character watching all the events passing by, he fears the change and fears his father is ashamed of him. ?I knew he saw my car sickness as yet another of my array of weakness- I saw it on his embarrassed face? Accepting that it is yet another display of his weakness portrays he has no willpower or belief he is anything but weak. ...read more.

Journeys throughout the novel are manly associated with car sickness for Amir. The sickness is represented as a metaphor for Amir because he has an inability to cope with change which makes him sick to the stomach. It also shows that Amir is possessed with fear. There is also vivid descriptions of the basement in which Amir and father wait for the final part of their journey. He pays attention to the little details and tells us how he can see ?shapes huddled around the room, their silhouettes thrown on the wall by the light of pair of kerosene lamps? and then later ?I discover the source of the scratching sounds, Rats? The focus of little details demonstrate a claustrophobic environment in stark contrast to Amir's earlier description of his house Baba had build for them. There is limited description of their house but are very rich and grand compared to the basement which they are in closed in. ...read more.

Amir travels from place to place overwhelmed by guilt he has been desperately trying to escape from and the one place he gains redemption was the place it all had started, Kabul. In the final chapter there is a sense of hope and atoned sins being converted into the last lines of chapter 25. ?Because when spring comes, it melts the snow one flake at a time, and maybe I just witnessed the first flake melting? Amir has just witnessed Sohrab smiling for the first time and takes on board that it's the beginning of the sins becoming atoned and the baggage is finally shifting from him. Hosseini uses a metaphor for the start of his redemption little by little as the sun begins to melts away his sins. Hosseini describes the guilt as a snow flake, which has covered up the surface for so long. It also links back to the day in its self as it was snowing that day in December when the rape of Hassan happened portraying it was a dark place for Amir mentally and physically. ...read more.