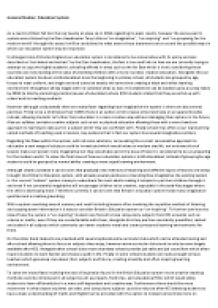 Can the British Education System be described as &quot;uninspiring&quot;?

Transfer-Encoding: chunked ﻿General Studies: Education System As a country Britain fell into the top twenty at place six in 2014 regarding its exam results, however the same year its system was criticised by the Eton Headmaster Tony Little as ?un-imaginative?, ?un-inspiring? and ?un-preparing for the modern world? through this essay it will be considered to what extent these statements are true and the possible ways in which our education system may be improved. Unchanged since Victorian England our education system is considered to be conservative with its policy and was described as ?out-dated and archaic? by the Eton headmaster, the fact is true and links to how we are currently trying to attempt to copy the highly academic schooling offered in areas such as the far East which is ironic considering those countries are now looking at the value of providing children with a more rounded, creative education. Alongside this our education system has been institutionalised since the beginning in primary school, all students are grouped by age, forced to wear uniform, and begin and end school at exactly the same time creating a black and white learning environment throughout all key stages with no variation what so ever, this statement can be backed up by a survey taken by EDGE (a charity promoting practical causes of education) ...read more.

To solve the many flaws involving the lack of inspiration found in the British Education system more creative teaching methods could be introduced in all subjects such as projects, field trips, and educational films which would allow students to learn efficiently but in a more self-dependent and creative way. Furthermore there should be more movement in what classes students can take, and compulsory subjects could be reduced after KS3 allowing students to have a basic understanding of maths and English but be provided with the option to instead concentrate more on subjects which they are passionate about. Alongside this predicted grades could be reduced and instead targets with specific areas to improve on should be set creating a less pressured environment for studies, preventing students from being dissuaded from taking a subject. It can be strongly believed that our education system is un-inspiring and can be seen that it grows more so between the jump from primary to secondary school, the basic and repetitive style used in teaching can be clearly seen in all age groups constantly creating an uninspiring learning environment, although there are inspiring factors within the system they aren?t constant or always available in every situation. Therefore on the whole at this point the British education system is more un-inspiring than inspiring. ...read more.