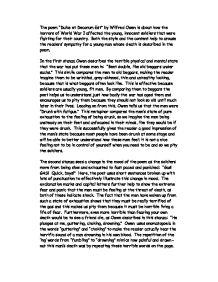 How does the style and content of 'Dulce et Decorum Est', by Wilfred Owen, arouse the readers' sympathies over the horrors of WWI?

The poem "Dulce et Decorum Est" by Wilfred Owen is about how the horrors of World War I affected the young, innocent soldiers that were fighting for their country. Both the style and the content help to arouse the readers' sympathy for a young man whose death is described in the poem. In the first stanza Owen describes the terrible physical and mental state that the war has put these men in: "Bent double, like old beggars under sacks." This simile compares the men to old beggars, making the reader imagine them to be wrinkled, grey-skinned, thin and unhealthy looking, because that is what beggars often look like. This is effective because soldiers are usually young, fit men. By comparing them to beggars the poet helps us to understand just how badly the war has aged them and encourages us to pity them because they should not look so old until much later in their lives. ...read more.

The fact that the men have woken up from such a state of exhaustion shows that they must be really terrified of the gas and this makes us pity them because it must be horrible living a life of fear. Furthermore, even more horrible than fearing your own death would be to see a friend die, as Owen describes in this stanza: "He plunges at me, guttering, choking, drowning." Owen uses onomatopoeia in the words "guttering" and "choking" to make the reader actually hear the horrific sound of a man drowning in his own blood. The repetition of the 'ing' words from "fumbling" to "drowning" mimics how painful and drawn-out this man's death was by repeating these horrible words on the page. This makes us pity this man because Owen makes it clear that his death was horrific and that he suffered terrible pain. Finally, the last stanza forces us to pity the poor soldier by focusing on his final, painful, dying moments: "His hanging face, like a devil's sick of sin." ...read more.

Leading on from this, he finally makes an important criticism of the government for telling innocent young men 'the old lie' to make them sign up to the army: that it is sweet and noble to die for one's country. These final lines tell the reader exactly what Owen thought about the war propaganda and it shows that the title, Dulce et Decorum Est (It is Sweet and Noble), is meant ironically. Owen actually thinks that it is a horrific thing to in such a way, and not at all 'sweet' or 'noble'. In conclusion, the content of the poem tells the story of the horrific death of an innocent young soldier and how his death haunts the other soldiers who survived. Our sympathy is naturally aroused by this as the actual incident is horrible. The style of the poem helps to make us sympathise with the soldiers because Owen deliberately uses techniques such as word choice, onomatopoeia and similes to successfully describe the soldier's death realistically to make it seem more awful. Word count: 838 ...read more.