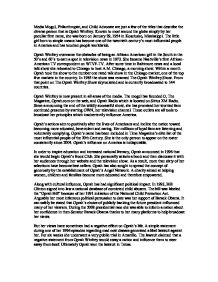 Media Mogul, Philanthropist, and Child Advocate are just a few of the titles that describe the diverse person that is Oprah Winfrey. Known to most around the globe simply by her peculiar first name, she was born on January 29, 1954 in Kosciusko, Mississippi. The little girl born to simple means has become one of the twentieth century's most influential people in America and has touched people worldwide. Oprah Winfrey overcame the obstacles of being an African American girl in the South in the 50's and 60's to earn a spot in television news in 1973. She became Nashville's first African-American TV correspondent on WTVF-TV. After some time in Baltimore news and a local talk show she relocated to Chicago to host A.M. ...read more.

Oprah's actions aim to positively alter the lives of Americans and incline the nation toward becoming more educated, benevolent and caring. Her millions of loyal fans are listening and voluntarily complying. Oprah's name has been included in Time Magazine's elite list of the most influential people of the 20th Century. She is the only person to appear on the roster consistently since 2004. Oprah's influence on America is indisputable. In order to inspire education and increased national literacy, Oprah announced in 1996 that she would begin Oprah's Book Club. She personally selects a book and then discusses it with her audiences through her website and the television show. ...read more.

During the 2008 presidential race she was able to inform a nation about her confidence in then-Senator Barack Obama thanks to her many platforms to help broadcast her views. But her views have sometimes had a negative effect on Oprah's life. A simple statement during one of her 1996 episodes regarding mad cow disease generated a libel lawsuit against her. For six weeks she underwent a very public trial in Amarillo. The lawsuit claimed that a negative statement from Oprah Winfrey would sway a nation and influence them to steer away from beef. Ultimately Oprah won the lawsuit in Texas. Oprah Winfrey is an icon native to The United States but shared by the world. Her influence has touched millions of lives and incited American events and spun cultural change. Ms. Winfrey is a genuine national treasure to be cherished. ...read more.