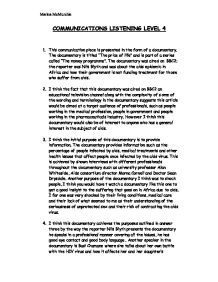 The Price Of Life Aids

COMMUNICATIONS LISTENING LEVEL 4 1. This communication piece is presented in the form of a documentary. The documentary is titled "The price of life" and is part of a series called "The money programme". The documentary was aired on BBC2; the reporter was Nils Blyth and was about the aids epidemic in Africa and how their government is not funding treatment for those who suffer from aids. 2. I think the fact that this documentary was aired on BBC2 an educational television channel along with the complexity of some of the wording and terminology in the documentary suggests this article would be aimed at a target audience of professionals, such as people working in the medical profession, people in government and people working in the pharmaceuticals industry. However I think this documentary would also be of interest to anyone who has a general interest in the subject of aids. 3. I think the initial purpose of this documentary is to provide information. ...read more.

5. This documentary is about aids in Africa and the struggle the people have to receive any sort of medical treatment. The documentary shows a woman Busi Chamane an HIV sufferer and talks a bit about her experience coping with aids. Busi was infected with the HIV virus by her husband who worked away from home, Busi's husband left her and her children and sold their home; Busi was then sacked from her job due to being HIV positive and was also throwing out by her family. On top of this the biggest fear Busi was going through was that her daughter who was born after Busi was infected would also be infected with the HIV virus but after months of tests her daughter was giving the all clear. The documentary also touches upon the issue of government funding for medical treatment for those who suffer from the virus. British made drug AZT (Glaxxo Welcome) is a drug that can prevent the virus being passed from mother to child and is being offered to Africa at a cut price 75% ...read more.

Throughout the time Busi has been infected she has managed to come to terms with her virus and is determined to make the most of the rest of her life, however she still shows anger towards the government and the drugs companies who appear to have the attitude that profits are more important than life. 7. I think this documentary has been very effective in achieving the purposes outlined in question three, it achieves this by the good communication, body language, eye contact, good vocabulary. It films people in their homes, out in their community and in the hospitals where you see one patient dying surrounded by family and friends singing and praying around her bedside. It also achieves the purpose of giving information by talking to professionals i.e. medical, government, university professors and people working for the aids consortiums. It shows good footage of the miners drinking and mixing with prostitutes and also talks to a girl who worked as a prostitute who is now campaigning for safer sex in order to help stop the aids epidemic from rising further. ?? ?? ?? ?? Marina McMurchie ...read more.