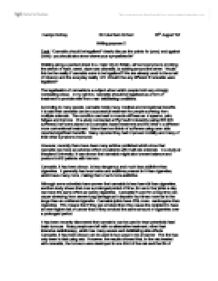 &quot;Cannabis should be legalised&quot; clearly discuss the points for (pros) and against (cons). you should also show where your sympathies lie&quot;

Carolyn McKay St Columba's School 30th August '04' Writing purpose 2 Task: "Cannabis should be legalised" clearly discuss the points for (pros) and against (cons). you should also show where your sympathies lie" Walking along a packed street in a major city in Britain, almost everyone is smoking; the stench of hash, weed, dope-yes cannabis, is swirling around the street. Would this be the reality if cannabis were to be legalised? We are already used to the smell of tobacco and the everyday reality of it. Would it be any different if cannabis were legalised? The legalisation of cannabis is a subject about which people hold very strongly contrasting views. In my opinion, cannabis should be legalised as a form of treatment to provide relief from man debilitating conditions. According to many people, cannabis holds many medical and recreational benefits. It is said that cannabis can be a successful treatment for people suffering from multiple sclerosis. The condition can lead to muscle stiffness and spasms, pain, fatigue and tremors. ...read more.

Cannabis if used for a long time can cause wheezing from severe lung damage as it deposits four times more tar in the lungs than an unfiltered cigarette. Cannabis joints have 50% more carcinogens than cigarettes. This means that if they are smoked then they cause the recipient to have an ever higher risk of cancer than if they smoked the same amount of cigarettes over a prolonged period. It has been recently discovered that cannabis can be used to treat potentially fatal brain tumours. Many people are left with no alternative treatment, other than intensive radiotherapy, which has many severe and debilitating side effects. Cannabis, it has been shown can be used in two ways to treat cancer. The first has only been in trial using rats. However, the results showed that, in the rats treated with cannabis, the tumours were destroyed in one third of the rats and the life of another third was prolonged for up to six weeks. ...read more.

Keith Hellawell (the former government drugs expert) described cannabis as a "gateway drug"; he believes it leads to the miss use of harder substances. However, the statistics show that many young people under the age of 25 have tried cannabis (approximately 20%) and the percentage who go on to use harder drugs such as heroin is very small (less than 2%). This shows that the argument that cannabis use leads to the use of harder drugs is unfounded. I believe that cannabis should be legalised. I have shown that in has many medical values and I believe that people should not be punished for using cannabis to relieve pain from debilitating conditions. However, the medical values are not without unpredictable side effects and I believe a lot more research into the medicinal use of cannabis is needed. The topic of the legalisation of cannabis will continue to be an area of debate until scientists are able to agree on the medical uses and possible side effect of cannabis. ...read more.