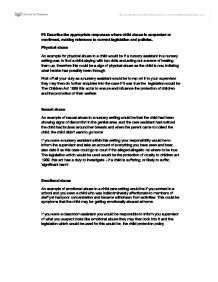 Describe the appropriate responses where child abuse is suspected or confirmed, making reference to current legislation and policies.

P5 Describe the appropriate responses where child abuse is suspected or confirmed, making reference to current legislation and policies. Physical abuse An example for physical abuse to a child would be if a nursery assistant in a nursery setting was to find a child playing with two dolls and acting out a scene of beating them up, therefore this could be a sign of physical abuse as the child is now imitating what he/she has possibly been through. First off all your duty as a nursery assistant would be to report it to your supervisor they may then do further enquiries into the case if it was true the legislation would be The Children Act 1989 this act is to ensure and influence the protection of children and the promotion of their welfare. ...read more.

This could be symptoms that the child may be getting emotionally abused at home. If you were a classroom assistant you would be responsible to inform you supervisor of what you suspect looks like emotional abuse they may then look into it and the legislation which would be used for this would be the child protection policy. Neglect An example of neglect would be a child in a primary school setting who was continually late to school and never wore a coat throughout the whole winter. Inadequate clothing which is not suitable for the weather conditions. If this were to happen in your primary school setting your responsibility would be to inform your supervisor and they might look into the case. The legislation that is but in place for neglect would be human rights act 1998 this is to ensure the child has the right to life; it includes the right to education. ...read more.

The idea of the Children's act is to ensure that children between the ages of 5 and 13 are in regular attendance at school, reduce the risk of crime carried out by children between these ages and also ensure that they have the best possible start in live. UN Convention Order 1989 The main aim of the Order is the protection of the child and the protection of their welfare. The principles of the 1989 UN convention on the Rights of the Child for example, support the view that concerned attention should be given by families and the State to various aspects of children's lives, including education, care, recreation, culture and health, and children's social behaviour. The act places duty on local authority social services departments to investigate and take steps to prevent child abuse taking place. ?? ?? ?? ?? ...read more.