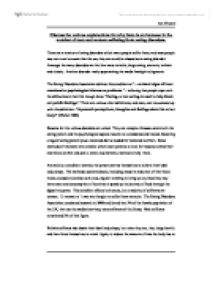 Discuss the various explanations for why there is an increase in the number of men and women suffering from eating disorders.

Discuss the various explanations for why there is an increase in the number of men and women suffering from eating disorders. There are a number of eating disorders which many people suffer from, and most people may not even be aware that the way they eat could be classed as an eating disorder. Amongst the many disorders are the four most notable; binge eating, anorexia, bulimia and obesity. Another disorder vastly approaching the media limelight is bigorexia. The Eating Disorders Association defines this condition as "...outward signs of inner emotional or psychological distress or problems." - believing that people cope with the difficulties in their life though food. "Eating, or not eating, is used to help block out painful feelings." There are various other definitions, and many can be summed up with this definition: "A person's perceptions, thoughts and feelings about his or her body." (Fisher 1990) Reasons for the various disorders are varied. They are complex illnesses where both the eating pattern and the psychological aspects need to be considered and treated. Restoring a regular eating pattern plus a balanced diet is needed for balanced nutrition. Some methods of treatment are available which teach patients to look for reasons behind their emotional conflict and seek a better, less harmful, method to help them. Anorexia is a condition whereby the person starves themselves to achieve their ideal body shape. The methods used are drastic, including; massive reduction of their food intake, excessive exercise work outs, regular vomiting to bring up any food they may have eaten and consumption of laxatives to speed up the journey of food through the digestive system. ...read more.

found that 45% of men where dissatisfied with their bodies. A disaffection previously seen in the past by women. In the UK, Dr Karen Henwood asked a sample of men between 15 - 34 about the socially acceptable 'body ideal'. She confirmed similar disaffection as with those in the USA. As men become more body conscious then we can expect increases of eating disorders. Overweight people are beginning to appear in TV adverts most notably Dawn French with her 'Terry's Chocolate Orange' advert and last years advert by Marks and Spencers to advertise clothing for the fuller figure. Reasons for people suffering an eating disorder are varied, but can be grouped into the three main areas: biological reasons, psychological reasons and sociological reasons. Society is clearly a large influence on our perceptions on what is acceptable. People have favourite actors and actresses and they themselves are under great pressure to be thin and therefore their fans see this image and believe it to be desirable. It can be argued that women suffer more because of the patriarchal control over women to try and control their bodies. Susie Orbach, and feminists, believe that men are to blame for women's eating disorders. Over the past few years, women have expressed their desire to be equal and have rights, which should mean that they are less likely to actually meet these thin expectations from men. However, the magazine 'New Women' has a predominantly female staff and a female editor, but this has not stopped them from portraying shapely women and men on a bed! ...read more.

In defiance of the biological reason for eating disorders some people believe that eating disorders are more prevalent in different classes of society, despite very little research having being done. However, it was found that out of 846 girls from different socio-economic backgrounds, higher levels of weight concern were seen in the groups from the higher class backgrounds (Wardle and Marsland (1990)). This finding was also shown with research by Striegel-Moore in 1986. As a conclusion to this, it is clear that culture plays a large part in influencing eating disorders. In more developed countries (UK and USA) beautiful, stunning and unique men and women parade on catwalks, act on stages and appear in glossy magazines. Because of their uniqueness, their image is more desirable and a small group of people are particularly keen to acquire this uniqueness and adopt an eating disorder. Where as in other areas of the world other cultures have not taken this view and learned to appreciate the larger female form. Whilst women suffer more from various eating disorders we can expect more eating disorders to affect men. This is in part due to more gay men 'coming out' and enjoying their new lifestyle openly and then having to bend to the demands of this way of life and be as desirable as possible to other men. As more sufferers are identified and seek help, the statistics will increase. More research will need to be carried out to better understand the relationship between the classes and why higher class women are more critical of their image. ...read more.