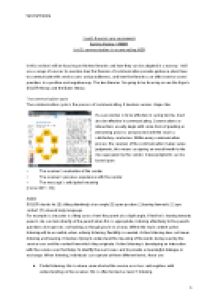 Egans SOLER theory and the Bales theory of communciation in a care setting.

﻿Sandra Mateta Health & social care coursework Sandra Mateta: 126694 Unit 2: communication in a care setting AO3 In this section I will be focusing on the two theories and how they can be adapted in a nursery. I will use a range of sources to examine how the theories of communication provide guidance about how to communicate with service users and practitioners, and how the theories can affect service users/providers in a positive and negative way. The two theories I?m going to be focusing on are the Egan?s SOLER theory and the Bales theory. The communication cycle The communication cycle is the process of communicating, it involves various stages like If a care worker is to be effective in caring he/she, must also be effective in communicating. Conversations or interactions usually begin with some form of greeting or welcoming process and proceed until the reach a satisfactory conclusion. Within every communication process the receiver of the communication makes value judgments, this means assigning an overall worth to the message given by the sender. Value judgments can be based upon: ? The receiver?s evaluation of the sender ? The receiver?s previous experience with the sender ? The message?s anticipated meaning (Fisher 2011: 70) AO3B SOLER stands for [S] sitting attentively at an angle [O] open posture [L]leaning forwards [E] eye contact [R] relaxed body language. For example is a teacher is sitting across from the parent at a slight angle, if he/she is leaning towards parent, she can look directly at the parent when this is appropriate, listening attentively to the parents questions & responses, not looking as though you?re in a hurry. ...read more.

Eye contact should be used appropriately and staring should not be used as this could be perceived as being rude, and very unprofessional. The last aspect of SOLER that could be used while the nursery manager and nurse are interacting is relaxed body language, this could be in the form of smiling, occasionally smiling shows that you?re not tense and it also makes the other person you are interacting with feel comfortable. Also showing relaxed facial expressions also make the other person you?re interacting with feel less intimidated and be able to open up. When a nursery nurse is talking to a parent at parents evening they need to include the SOLER theory in their interactions. The nursery nurse should sit attentively at an angle at the same level as the parent so they can have eye contact. Sitting at the same level and sitting attentively shows equality and that the nursery nurse is listening and is showing interest in the child being discussed. The nursery nurse should show an open posture. The nursery nurse will not cross arms or legs as this may be seen as being defensive by the parent, they should have their arms uncrossed because it could be perceived by the parents as the nursery nurse not showing interest in the child being discussed. Having an open posture also shows that the nursery is not being withdrawn and that they are happy to talk about the child with confidence. Another aspect of the SOLER theory a nursery nurse should use is leaning forward, during the parents evening the parent might ask to have a look at the child?s progress, this is normally recorded on an official seat, the nursery nurse will need to place the sheet in ...read more.

On the other hand, some nursery nurses may give a negative interaction. This could be that they are drawn back and they strongly disagree with any of the suggestions that are being discussed. Some nursery nurses may not even participate in the interaction which would be a negative impact. Another example of using the Bales theory in a nursery setting is when the staff and the parents are discussing a residential trip. Some parents in the group may take a more controlling position where they ask more questions. By doing this, it would benefit other parents because they might have been thinking about the same question. Other parents in the group may be anxious or tensed that their child is going away especially if it?s their first time. A nursery nurse might try and make the parents relaxed by adding in humour to relax the parents and make them reassured that their children will be safe during the residential trip. A nursery manager may also be present at this meeting and by having the manager there; it could make the parents feel ensured that the trip is going to go well. Also, parents could ask the nursery manager about certain information as a nursery manager has a higher status than a nursery nurse. Positives & negatives of Bales theory There are positive impacts on using the Bales theory. For example, when there is a group interaction, one member in the group could encourage laughter and humour and this would help others to loosen down and relax. It would also engage them to the interaction. However, there are also negative impacts. For example, this could be when a member if the group is not participating at all in the group interaction. The theories of communication (bales & SOLER theory) ...read more.