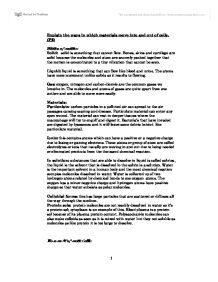 Explain the ways in which materials move into and out of cells. (P2) States of matter: Solid: solid is something that cannot flow. Bones, skins and cartilage are solid because the molecules and atom are securely packed together that the motion is concentrated to a tiny vibration that cannot be seen. Liquid: liquid is something that can flow like blood and urine. The atoms have more movement unlike solids so it results to flowing. Gas: oxygen, nitrogen and carbon dioxide are the common gases we breathe in. The molecules and atoms of gases are quite apart from one anther and are able to move more easily. Materials: Particulate: carbon particles in a polluted air can spread to the air passages causing scaring and disease. Particulate material can enter any open wound. The material can rest in deeper tissues where the macrophage will try to engulf and digest it. Bacteria's that have invaded are digested by lysosomes and it will leave some debris behind like particulate material. Ionic: this contains atoms which can have a positive or a negative charge due to losing or gaining electrons. These atoms or group of atom are called electrolytes or ions that usually are moving in and out due to being needed or eliminated products from the thousand chemical reaction. In solution: substances that are able to dissolve in liquid is called solutes, the liquid is the solvent that is dissolved in the solute is a solution. ...read more.

Exocytosis: this sis the process of releasing the materials from the inside in to the to the tissue fluid. The membrane vesicle moves through the cells into the cell membrane by combining with it and releasing the contents by introducing the secretary molecules into the body system. This is also a method of replacing cell membrane that is used up in the exocytosis. Factors affecting movement: Influences on movement of materials: Size: the size of molecule is very important in osmosis as if its big it won't be able to move around the body. The size of the surface is also important as if the molecules need to big enough to be moved to do its work in the cell. Distance: the distant between the cells and material can influence the movement as if it to far apart it would be difficult to make a journey in an out, therefore it won't have enough energy to repeat the process. Temperature: if the temperature is to hot it can bust or kill the cells which can damage the functioning of the body. Osmotic potential: this solution has the power to gain or loose water molecules the membrane. The weaker the solution the higher osmotic potential it has than a concentrated solution. When the tissue fluid returns to the blood the osmotic are low. ...read more.

The semi-permeable is helped by the phospholipids protecting the cells and insuring that the barriers of other material do not enter or exit the membrane. This helps the other organic chemicals from being produced inside the cells. Glucose is the main molecule that helps the energy movement. Glucose is the only molecule that is able to go through where as other materials like acid, oxygen, lipids, amion, water and carbon dioxide are likely to defuse in and out of the cells. Therefore the bilayer is there to allow certain molecules to go through if all molecules try to go through the wall. Bilayer would give some of molecules from the receptors for the chemical cell for example the transmitter that is found in the human body The water is passed from phospholipids bilayer due hydrophobic that has a tail water that does not allow the tail water to go through the molecule. Molecules that are found in the human body are not able to go through except molecules like water, oxygen and carbon dioxide. Other than those molecules, molecules that try to go through wont be able to because for that to happen they have to go through the bilayer and then into then to cells. This process can only take place if a protein from somewhere else comes and allows them to go pass through. Sources: http://www.emc.mariocopa.edu/faculty/farabee/BIOBK/BioBooktransp.html#The%20Membrane http://en.wikipedia.org/wiki/Lipid_bilayer ?? ?? ?? ?? 1 ...read more.

Star rating 3
This assignment has been produced for Unit 13