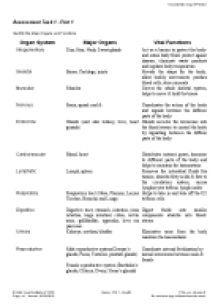 Identify the Major Organs and Functions. Treatment of open wounds.

Discuss how the body would regulate these blood glucose levels through negative feedback. (HINT. Check out the Endocrine System chapter and the diagram related to regulation of blood glucose levels). 3. A 64 year old man is admitted to the hospital for non-healing pressure ulcers to his heels. He has been bedridden for 10 years because of a degenerative muscle disease. Explain why protein would be an important part of his diet to promote wound healing. Wound healing is the process of repair that goes after injury to the skin or other soft tissues. Pressure ulcer can also be considered as wounds. Casein is a milk protein which forms a gel or clot in the stomach, making very efficient in nutrient supply. And the clot can be able to provide sustained slow release of amino acids into the blood stream, (it may last for several hours). And also Casein is a good source of essential amino acids, mainly glutamic acid. It also contains necessary elements for wound healing (proline, aspartate, leucine and lysine) ...read more.

Her friend told her that if her answer was “no” to the questions that were asked by the ABCD rule, she had nothing to worry about. What is the ABCD rule and should she ignore the spot if her answers are negative? A = Asymmetry: Moles are commonly symmetrical and round. Very early melanomas, are asymmetrical assuming different forms. One half does not match the other half. B = Border: Commonly moles, have even and smooth borders. Early melanomas, are usually uneven and notched borders.The edges are ragged, notched or blurred. C = Color: Moles commonly are a single shade of brown, early malignant melanomas shows brown-tan or black color. Further, as melanomas progress, may see red, white, and blue color. D = Diameter: Early malignant melanomas, differently from moles, tend to grow larger in diameter. First suspects in melanoma start fom, a 6 millimeters diameter on. Any sudden or continuing increase in size should be of special concern. © Gold Coast Institute of TAFE Owner: ITG 1 - Health POL-xxx- Version # Page of - Issued: 16.03.2010 Do not save copy of blank form for reuse ...read more.