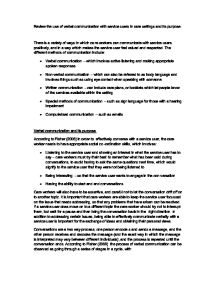 Review the use of verbal communication with service users in care settings and its purpose.

According to Fisher (2006) the process of verbal communication can be observed as going through a series of stages in a cycle, with: * The first stage - being the expression of thoughts * The second stage - as observing the other person's body language * The fourth stage - is listening to the other person's verbal response * The fifth stage - is decoding and properly understanding that response * The sixth stage - discussing new ideas Verbal communication is important in care settings for obtaining information from service users such as their state of health, preferences, views and opinions, so that they can be actively involved in their care. It is therefore important to make sure that any information which has been obtained is accurate, by making sure that the service user has fully understood what has been said in the conversation. For example, any terminology which could be confusing needs to be explained. Example A nurse asks a service user 'have you voided today'? The service user may not even know what this means and so just answer 'no'. ...read more.

By giving information in an easy to understand way, service users will be able to give the appropriate responses and the care worker can then obtain the correct information needed. Using appropriate verbal communication is also important when giving, or receiving, instructions. For example, in a primary school a teacher may have to give instructions to pupils on how to take a test; instructions should be clear and easy to understand. Short sentences are often best when giving instructions, for example a teacher might say to pupils before a test 'no talking, or looking over at others' work', and then perhaps follow this with an explanation: 'so we know that no one is cheating'. Another example of when a care worker may have to give instructions is if a nursery is having an outing to the park, and the carer needs to let the children know what is expected of them; the children may be given instructions such as 'hold hands with a buddy, and stay on the path with everyone else', and again could be followed by an explanation of why they have to follow the instruction: 'so that you don't get lost'. 980 Words ...read more.

A rather short essay but a good start on communication skills.

The writer has only really discussed the communication cycle but it is in quite a bit detail and includes some good examples.

This would be an excellent essay to introduce communication skills.