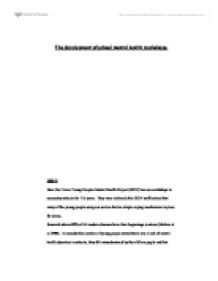 The development of school mental health workshops. ISSUE Hear Our Voice Young Peoples Mental Health Project (HOV) has run workshops in secondary schools for 1 1/2 years. They were initiated after HOV staff noticed that many of the young people using our service had no simple coping mechanisms in place for stress. Research shows 80% of all modern diseases have their beginnings in stress (Meltzer et al.1999). A considerable number of young people stated there was a lack of mental health education in schools, they felt misunderstood by their fellow pupils and that their inability to deal with the stresses of everyday life had had a derogative affect upon their health. HOV is the only mental health project in Cornwall and although other facilities are available for young people, in such a rural area, unless young people live near a town, they are unable to access services easily due to insufficient transport. Many, therefore, are reliant on school support. Teachers of Personal Health and Social Education (PSHE) now find themselves under great pressure, teaching a wide ranging subject area, including mental health (a subject many teachers have very little accurate knowledge of). After examining the national curriculum and talking to teachers in Cornwall, HOV offered workshops covering the mental health aspects of the PSHE classes. As a specialist service, HOV can provide young people with detailed understanding and knowledge of the subject. Workshops would focus on Year 10 pupils, starting the first year of their GCSE's. Body image and sexual attraction/ identity issues tend to come into fruition at this time, making this age group susceptible to mental health problems. In the years 1999 and 2000, the number of people calling the Eating Disorder Association grew from 16,180 to 20,450 (EDA website). Adolescence is an age of self consciousness and of critically analysing other people's judgements of you. Levels of self esteem may depend on an adolescents differentiation of his or her actual and ideal self. ...read more.

CURRENT SITUATION The development of school workshops has been a tremendous learning experience. I have become aware of different working styles in single or mixed sex groups and I am content to work either way, although my preference now lies with single gender groups. The consultation with TYMG has improved my confidence whilst working in young men's groups and this is a continuing process. Currently I am piloting a series of sessions with young men who attend Out of School Education in Penzance, providing similar workshops to those used in schools. Single gender workshops are proving to be the most productive. All schools are now given the opportunity to run their sessions in same sex groups. Due to the difficulties with altering the school timetable, only two schools have booked single sex workshops at this date. Discussions are taking place with schools in the Helston, Falmouth, Wadebridge areas, to provide workshops for their students in the near future. The single sex approach is being explained in greater detail than with preceding schools. Whether workshops remain mostly mixed gender or not remains to be seen and depends largely on compliance from the schools involved. In the last year workshops have been assessed internally and externally, resulting in changes necessary for improvement. This assessment process will continue on a regular basis. References Meltzer, H. et al.(1999). Office for national statistics - Mental health of children and adolescents in Great Britain. London. The Stationery Office National Curriculum for England. (1999). London. Department for Education and Employment and Qualifications and Curriculum Authority Neck, C. P. & Barnard, A. W. H. (1996). Managing your mind: What are you telling yourself? Educational Leadership Eating Disorder Association Website. edauk.com Acknowledgements * Hear Our Voice, Young Peoples Mental Health Project (staff and young people). * Secondary schools in Bodmin, Brannel, Budehaven, Callington, Camborne, Cape Cornwall, Newquay, Penryn, Roseland, Redruth, Saltash, St. Ives and Truro (pupils and teachers). ...read more.

"Can we have a stripper next week?" "I realised my friends have similar problems from me and I'd not noticed before. I'm going to be a better friend from now on and we can share our problems more" APPENDIX 4 Single sex feedback Female evaluation comments: "There is help there if you need it..." "Other people get stressed as well. It is great to know I'm not the only one. " "Enjoyable, good to know you're there!" "Tool Kit for life" "Dealing with problems in life" "Good to be talking so openly with other girls and not worrying about the boys hearing" "It's a survival kit for stress..." "...Making us think about mental health and how it affects us through life" "...made us think of things we may not have otherwise done." "Thank you. I am going to try some of the ways we talked about today rather than what I do at the moment (not v. good ways)" "I think I understand more about eating sensibly... I didn't realise my mates liked me so much!" "Would you be able to come back? Some of us have worries about self harm and eating..." "I think it should be a longer workshop. You were trying to cram it all in and its all stuff we should know about" Male evaluation comments: "ok I suppose..." "Started off good. Liked the drawing round bodies bit but everyone got bored after 1/2 hour" "Next time make it more active" "My mate fancies you!!!" "Need to think about this one..." "Great. Thanks... Sorry some of the others were p-----s!" "Helpful in many ways. Most of all I saw myself in a different way than normal... I am just an average kid" "Bit girly for me" "Ace to have a session without girls. I wouldn't have said half as much if they were here and they talk so much about their problems, you don't get a word in" "It's been more helpful than you could know..." "Alright I suppose" "Enjoyed it. Learnt quite a bit." ...read more.