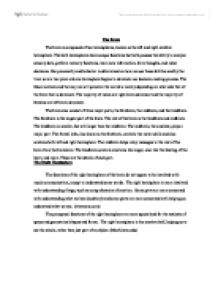 The Brain The brain is composed of two hemispheres, known as the left and right cerebral hemisphere. The both hemispheres have unique functions but both possess the ability to analyze sensory data, perform memory functions, learn new information, form thoughts, and make decisions. Our personality and behavior is determined on how we use these abilities and by the time we are two years old one hemisphere begins to dominate our decision-making process. The future outlook and the way we will perceive the world is mainly depending on what side that of the brain that is dominant. The majority of males are right-brain dominant and the majority of females are left-brain dominant. The brain also consist of three major parts, the forebrain, the midbrain, and the hindbrain. The forebrain is the largest part of the brain. The rest of the brain is the hindbrain and midbrain. The hindbrain is smaller, but still larger than the midbrain. The midbrain, the smallest, plays a major part. The frontal lobe, also know as the forebrain, controls the motor skills and also contains both left and right hemisphere. The midbrain helps relay messages to the rest of the brain from the brainstem. The hindbrain controls emotions like anger, also like the beating of the heart, and more. These are the details of each part. The Right Hemisphere The functions of the right hemisphere of the brain do not appear to be involved with much communication, except to understand some words. ...read more.

For instance, when left-brain students read or listen, they look for pieces so that they can draw logical conclusions. They have no problem comprehending or expression oral or written language and they have little trouble expressing themselves in words. Studies have shown that "if the left hemisphere is under activated or has been damaged due to injury, people will be depressed, have no drive and generally feel miserable. Even minor excitements will lead to anxieties and panic" (Eterna). The left hemisphere also controls the muscles on the right side of our body and our physical ability. The table below by Ehrenwald briefly lists the left brain attributes. General Left brain attributes Hemisphere Left Thinking Abstract, linear, analytic Cognitive style Rational, logical Language Rich vocabulary, good grammar and syntax; pose Executive capacity Introspection, will, initiative, sense of self Specialized functions Reading, writing, arithmetic, sensory-motor skills Time experience Sequentially ordered, measured Spatial orientation Relatively poor Psychoanalytic aspects Secondary process, ego functions, consciousness; superego? Ideal prototype Aristotle, Appollonian mode, Marx, Freud, Koestler's Source: Ehrenwald (1984: 16) In general left side dominant people often are future oriented, and they like to be in leadership roles and high management positions. "They are task oriented, result oriented, like to work with a list of things to be done. In order to be happy, they need success and recognition, but also order and structure. They have a very rigid vision of their own identity and their goals" (Eterna). ...read more.

Hindbrain The Hindbrain is a portion of the brain that lies just inside the skull and is a continuation of the spinal cord. Incoming signals that are sent from the spinal cord reach the hindbrain first; from there different signals disperse to different areas of the brain. The hindbrain contains three main sections: the medulla, reticular formation and the cerebellum. The Medulla: this portion controls many of our body's autonomic functions, such as heart rate, blood pressure and breathing. Reticular formation: located at the core of the brainstem, the reticular formation is a mesh-like collection of nuclei cells that mainly controls arousal and attention. These cells receive input from the body's sensory systems such as sight, smell and taste. The brain has fibers that rise to form a network called the reticular activating system which influences assertiveness and wakefulness. Some of these fibers carry pain signals from the spinal cord that connect in the reticular formation and immediately arouse the brain from sleep. Cerebellum: located at the base of the brain and is a walnut shaped structure that is responsible for motor co-ordination, posture and maintaining equilibrium. For several years it was thought to primarily control finely coordinated movements, such as threading needles. Now it also allows for the eyes to track moving objects or targets accurately. It is also thought to be a storage house for well-rehearsed movements, such as dance steps, playing musical instruments and athletics. Since the cerebellum is heavily involved in the balance and coordination for walking and other motor skills, alcohol directly impairs the cerebellum and disrupts these skills. ...read more.