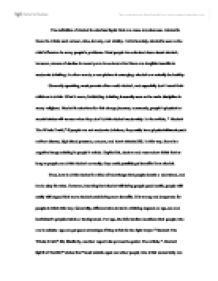 The definition of alcohol is colorless liquid that can cause drunkenness.

The definition of alcohol is colorless liquid that can cause drunkenness. Alcohol is found in drinks such as beer, wine, brandy, and whisky. Unfortunately, alcohol is seen as the chief offenders in many people's problems. Most people have slanted views about alcohol; however, dozens of studies in recent years have shown that there are tangible benefits to moderate drinking. In other words, a new picture is emerging: alcohol can actually be healthy. Generally speaking, most parents often avoid alcohol, and especially don't want their children to drink. What's more, forbidding drinking is usually seen as the main discipline in many religions. Alcohol is notorious for this charge,because, commonly, people's physical or mental states will worsen when they don't drink alcohol moderately. In the article, " Alcohol: The Whole Truth," if people are not moderate drinkers, they easily have physicalailments,such as liver disease, high blood pressure, cancers, and heart attacks (60). In this way, there is a negative image existing in people's minds. Depite this, doctors and researchers think that as long as people can drink alcohol correctly, they could possibly get benefits from alcohol. Thus, how to drink alcohol is a kind of knowledge that people should understand, and try to obey its rules. However, knowing that alcohol will bring people good health, people will easily will expect that more alcohol could bring more benefits. ...read more.

According to researchers form the Hebrew University of Jerusalem in Israel, they experimented with two different groups. One group was given beer, and the other water. The people in the groups ate the same kinds of food in the time allotted. The men were among middle or old age and had a common physical problem-heart disease. After a long period of observation, researchers found that people in the group drinking beer raised the level of HDL and antioxidants which both prevent the risk of heart attacks. On the contrary, researchers found there were no positive changes in the non-beer-drinking group (3). Thus, people should understand the positive benefits of beer. By the same token, red wine also plays an important role in people's health. The information notes that there is a specific chemical component, which is called flavonoid, that serves as an antioxidant to prevent heart attacks and blood clots ("Alcohol: Spirit of Health" 39). In other words, red wine decreases the risk of heart disease. Another testimony notes a new finding on flavonoid in the red wine. Some researchers actually have proven aspirin can lower platelet activity, which is good for people's hearts. Similarly, flavonoids also have the same curative effects. However, Adrenaline, which is a hormone produced by the adrenal glands, can make aspirin eliminate its good influence for heart, but flavonoids won't be affected by adrenaline ("Wine, beer, liquor benefit the heart" 380). ...read more.

1996): 38-40. " Alcohol: The Whole Truth." Consumer Reports 64.12 (Dec. 1999): 60-61. " Moderate Drinking may Benefit Post-menopausal Women." Alcohol& Drug Abuse Weekly 14.40 (Oct. 2002): 8. "New Study Ties Moderate Beer Drinking to Lower Heart Attack Risk." Heart Disease Weekly 26 Jan. 2003: 3. "Wine, beer, liquor benefit the heart." Science News 148 (Dec. 1995): 380. " After making sure what my topic was, I went to the library and studied readers' guides, looking for related information about alcohol. I wrote down the information of sources in detail and then went to the backstacks in the basement in the library. However, I couldn't find some sources there, and I didn't have enough information to write my paper. Then, I also read the index of The Times to look for more related sources. I had to use a micro screener reading the sources from newspaper, and I printed the related ones. In addition, I took advantage of the Library Web Page looking for articles, which are related to the benefits of alcohol. After collecting all of my sources, I read all of them carefully and made highlights for my notes. I used these information to PowerPoint in laptop for my presentation and then practiced presenting without looking notes. On the other hand, I start to think how to organize my library paper well and wrote them down. Then, I went to the Writing Center to check my grammar mistakes and the structure of sentences. ...read more.