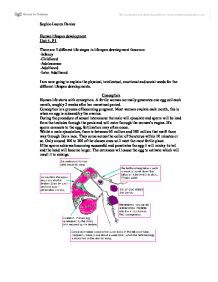 Human lifespan development Unit 4- P1 There are 5 different life stages in life span development these are: -Infancy -Childhood -Adolescence -Adulthood -Later Adulthood I am now going to explain the physical, intellectual, emotional and social needs for the different lifespan developments. Conception Human life starts with conception. A fertile woman normally generates one egg cell each month, roughly 2 weeks after her menstrual period. Conception is a process of becoming pregnant. Most woman ovulate each month, this is when an egg is released by the ovaries. During the procedure of sexual intercourse the male will ejaculate and sperm will be lead from the testicles through the penis and will enter through the woman's vagina. If a sperm connects to the egg, fertilization may often occur. Whilst a male ejaculation, there is between 60 million and 500 million that swift there way through like a race. They come across the collar of the uterus within 10 minutes or so. Only around 100 to 200 of the chosen ones will meet the most fertile place. If the sperm achieves becoming successful and penetrates the egg it will mislay its tail and the head will become larger. The entrances will cause the egg to activate which will result it to enlarge. -The woman. The woman's role in conception is vitally important during conception. All of woman's eggs are already present from the day they are born. From early years of childhood they begin to release eggs. But it has been notified tat a average female around the age of 50 still has around 1000 eggs left. If fertilization by the sperm occurs it should take place in the Fallopian tube, which then movements occur to the early embryo along towards the tube itself. If the egg fails to fertilize, or the embryo does not implant in the womb, the progesterone levels drop and periods take place. ...read more.

Children often practice the same bad habits of their parents, such as using drugs or drinking too much alcohol. The school, work, peers, and media (radio and TV) may also direct a child's actions. Adulthood (18 onwards) Physical Development Early Adulthood is a period that many of us reach or reached our peak in physical presentation. It is said that early adulthood starts at about 18 years of age and ends at about 30-40 years of age. For many people the early adulthood stage was a time of developing a sense of self and identity, learning to become independent of the parents, choosing a career, and having a family and kids of your own. During the later years of early adulthood and the beginning years of middle age, people seem to change from a more self indulgent way of life to a generous lifestyle. They start looking at things as "What's best for the family?" As people get older they start seeing the meaning of life as they know it. An understanding of what is important and what is not is define again and again as the individual lives with its family. Many times people start looking at their lives differently and do not like what they see as they get older thus sudden changes often occur. The examination of middle adulthood begins with a comprehensive look at the physiological changes that take place as men and women move beyond age 40. It is at this time of life that hair begins to turn grey and thin, the skin becomes drier and more wrinkled, and as fat is redistributed, the shape of the body begins to change. These changes, along with those that take place in vision and hearing, trigger a process of self-examination that culminates in transforming one's self-perception. The impact that lifestyle choices have upon one's overall health and well-being is also discussed, along with insights into why making changes in diet and exercise can be so difficult to accomplish at this stage of life. ...read more.

As a result, bones become more fragile and are more likely to break, especially in old age. As people age, their joints are affected by changes in cartilage and in connective tissue. The cartilage inside a joint becomes thinner, and components of the cartilage become altered, which may make the joint less resilient and more susceptible to damage. Thus, in some people, the surfaces of the joint do not slide as well over each other as they used to. This process may lead to osteoarthritis. Additionally, joints become stiffer because the connective tissue within ligaments and tendons becomes more rigid and brittle. This change also limits the range of motion of joints. (www.agingcenter.org) Age related Illnesses Elderly people who display "self-neglect" behaviour often suffer from common age-related ailments like depression, heart problems, and dementia, a new study shows. These disorders make the senior unable to perform the tasks necessary for daily living such as eating and bathing. Some elderly persons who neglect themselves simply lack access to support services, whereas others either refuse help, or when provided access to services cannot complete the tasks necessary to obtain these services, Dyer and colleagues note in the September issue of the American Journal of Public Health. (www.iconocast.com) Psychological changes Confidence- Some individuals get more confident and wiser as they get older, this may be due to the fact that that they have had more experience of communication then younger adults. However, it is dependent on their lifestyle and there past and how it has affected them later on in life. Self-esteem- Some older adults may have more self knowledge then they had in the past. Some older people may show wisdom in the way they talk to themselves. Physical & psychological changes due to ageing Negative perspectives- Ageism, effects of retirement, loss of family/friends- Disengagement theory. Retirement, role changes, loss of loved ones, ageism and financial concerns can leave individual feeling lonely, grieving, loss of appetite, anxiety, depressed, ETC. Positive perspective- Learning from pleasure; more time for hobbies; cultural variations- activity theory. ?? ?? ?? ?? Sophie-Lauren Davies ...read more.