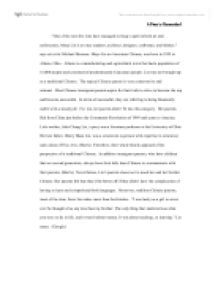 A face to remember

"One of the rare few who have managed to forge a path in both art and architecture, Maya Lin is at once sculptor, architect, designer, craftsman, and thinker," says art critic Michael Brenson. Maya Lin an American Chinese, was born in 1959 in Athens, Ohio. Athens is a manufacturing and agricultural town that had a population of 15,000 people and consisted of predominantly Caucasian people. Lin was not brought up as a traditional Chinese. The typical Chinese parent is very conservative and rational. Most Chinese immigrant parents aspire for their kids to strive to become the top and become successful. In terms of successful, they are referring to being financially stable with a steady job. For Lin, her parents didn't fit into this category. Her parents fled from China just before the Communist Revolution of 1949 and came to America. Lin's mother, Julia Chang Lin, a poet, was a literature professor at the University of Ohio. Her late father, Henry Huan Lin, was a ceramicist (a person with expertise in ceramics) and a dean of Fine Arts. (Harris) Therefore, their whole family opposed of the perspective of a traditional Chinese. In addition immigrant parents, who have children that are second generation, always have their kids learn Chinese to communicate with their parents. (Harris) Nevertheless, Lin's parents chose not to teach her and her brother Chinese. Her parents felt that they'd be better off if they didn't have the complication of having to learn and comprehend both languages. ...read more.

There were many people who disapproved, which led to many scornful statements. People were relating the memorial to Lin's sexuality and nationality, "She is a she, and she is an Asian, a g**k!" In November, it was publicized that there was a document allocating that one of the jurors was communist and the others were Protestants of the war. In addition, many solicitation letters sent to Washington and were comprised of a general nature stressing patriotic themes, the need to pay some sort of tribute to the Vietnam Veterans. People also criticized the idea of the names being chronological, the fact that it takes three minutes to look for a name and find it. (Maya Lin: A Strong Clear Vision) Since the directory is to be in the form of a rotating card file, it meant that when large numbers of visitors come to the monument, there will be a great deal of inconvenience. Any mechanical breakdown in the file's mechanism, moreover, could make it impossible to look up a name. In other words, people were pushing for the Vietnam Veterans names to be in alphabetical order. (Ross) Not only did the people who served in Vietnam protest this idea, but also political leaders as well. Henry Hyde, a Congressman from Illinois who never heard of such controversy until Pat Buchanan publicized such news, wrote to all the republicans in congress to write to President Reagan to block the decision of Interior Secretary Watt to uphold the monument. ...read more.

One of the images she found intriguing was of a naturally occurring water wave called a stokes wave. The image was the one she knew she had been looking for. Therefore, she began to translate it into three-dimensional models in sketches, clay and sand. (Lin, Maya Y) Although best known as a sculptor, Lin has also worked steadily as an architect, an activity she likes to keep separate from making sculpture, Lin's buildings clearly reflect the design issues that have consistently engaged her. For example, the Weber Residence in Williamstown, Massachusetts, which was constructed in 1994 concurrently with the Wave Field, has a roof line that is the result of Lin's free-hand drawings in which she was echoing the ripple of the surrounding Berkshire Mountains. Another of Lin's buildings was the Langston Hughes Library, constructed in 1999, in Clinton, Tennessee, is a marvelous example of adaptive re-use in which she transformed an 1860's barn and a couple of corn cribs into a 1200-square-foot reading room for a collection of research materials on civil rights. As an example of the "green" character of this project, Lin cites, among other things, using a near-by pond as a natural heat exchanger to reduce the library's heating and cooling costs. (Lin, Maya Y) Maya Lin's work has helped the Asian community become recognized in American society. She has been given the gift of perception and creativity that has been an influence to many people. All the concepts and ideas in her work as an artist, sculptor, architect, designer, and craftsman will be remembered forever. ?? ?? ?? ?? A Face to Remember1 ...read more.