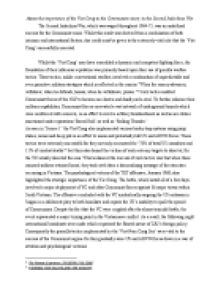 ﻿Assess the importance of the Viet Cong in the Communist victory in the Second Indochina War. The Second Indochina War, which was waged throughout 1964-75, was an undefined success for the Communist cause. Whilst this result was derived from a combination of both intrinsic and international factors, due credit must be given to the extremely vital role that the ?Viet Cong? successfully executed. Whilst the ?Viet Cong? may have resembled a dynamic and competent fighting force, the foundation of their infamous reputation was primarily based upon their use of guerilla warfare tactics. These tactics, unlike conventional warfare, involved a combination of unpredictable and even primitive military strategies which is reflected in the maxim ?When the enemy advances, withdraw; when he defends, harass; when he withdraws, pursue.?[1] Such tactics enabled Communist forces of the NLF to become an elusive and deadly arch-rival. To further enhance their military capabilities, Communist forces excavated a vast network of underground tunnels which were reinforced with concrete, in an effort to survive artillery bombardment as well as air strikes sanctioned under operations ?Barrel Roll? as well as ?Rolling Thunder.? As seen in ?Source 1? the Viet Cong also implemented various booby trap systems using punji stakes, mines and deep pits in an effort to maim and potentially kill US and ARVN forces. These tactics were extremely successful for they not only accounted for ?73% of total US casualties and 11% of combat deaths?[2] but they also denied the victims of such acts any targets to shoot at, for the VC usually deserted the area. ...read more.

Evidence of this can be seen in My Lai massacre of 1968, in which 450 women and children were executed for ?harboring? VC forces. Source 2, a quote by Robert McNamara, accurately summarizes the repercussions of such a successful Communist strategy stating, ?The picture of the world?s greatest superpower killing 1,000 non-combatants a week, while trying to pound a tiny backward nation into submission? is not a pretty one.?[5] In comparison to the committed nature of the Communist forces it appears that the United States fought a limited war which was justified by Lyndon Johnson in 1965 for Vietnam was only a ?little p**s-ant country.?[6] Unlike the VC who were quoted to ?take on tanks, if necessary, with bows and arrows?[7] the US were always too concerned over the repercussions of their actions rather than having a committed aim to quell the ongoing conflict. Throughout the conflict it is obvious that US Foreign Policy was always ?fighting with one hand behind its back?[8] due to LBJ?s attempts to maintain his ?guns and butter? approach which involved balancing civil works as well as ?prolonging? the Communist conflict. The United States incapacity to end the conflict was further highlighted by their fear of provoking Soviet or Chinese involvement. On many occasions, US forces had the ability to severely cripple the Communist campaign, but yet their incompetence always seemed to get the better of them which is why they never ?got the b****y job done.? The ?Viet Nam Cong San? ...read more.

In comparison to the VC?s established goals, an American author, William Broyles Jr, stated that ?There was no single goal in Vietnam; there were 2.8 million goals, one for every American who served there? the end one being to get out of Vietnam?[13] In hindsight, the dynamic role that the Viet Cong played throughout the Vietnamese conflict was vital to the Communist victory. Whilst the Viet Cong did match the large scale fighting of the NVA, its effective use of guerrilla warfare substantially crippled both the moral and fighting capabilities of the US and ARVN. Their selfless dedication to a state of ?total war? and their capacity to win the hearts and minds of the people essentially laid the foundations upon which Communist forces were able to launch a successful final campaign. Finally, their unwavering devotion to the Communist cause arguably provided the defining blow to the foreign imperialist?s occupation of South Vietnam. ________________ [1] ?The Vietnam Experience; FIGHTING FOR TIME? [2] ?VIETNAM; THE VALOUR AND THE SORROW? [3] http://www.spartacus.schoolnet.co.uk/ [4] ?ATLAS OF CONFLICTS; THE VIETNAM WAR? [5] ?ATLAS OF CONFLICTS; THE VIETNAM WAR? [6] ?CONFLICT IN INDOCHINA 1954-1979? [7] ?Contested Spaces; CONFLICT IN INDOCHINA? [8] ?VIETNAM; THE VALOUR AND THE SORROW? [9] ?VIETNAM; THE VALOUR AND THE SORROW? [10] ?THE AGE OF WAR; The United States Confronts the World? [11] ?VIETNAM; THE VALOUR AND THE SORROW? [12] ?Contested Spaces; CONFLICT IN INDOCHINA? [13] ?ATLAS OF CONFLICTS; THE VIETNAM WAR? ...read more.