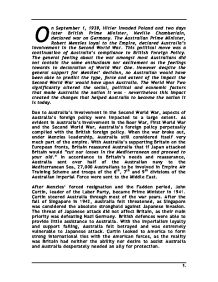 O n September 1, 1939, Hitler invaded Poland and two days later British Prime Minister, Neville Chamberlain, declared war on Germany. The Australian Prime Minister, Robert Menzies loyal to the Empire, declared Australia's involvement in the Second World War. This political move was a continuation of Australia's compliance to British Foreign Policy. The general feeling about the war amongst most Australians did not contain the same enthusiasm nor excitement as the feelings towards to declaration of World War One. However despite the general support for Menzies' decision, no Australian would have been able to predict the type, force and extent of the impact the Second World War would have upon Australia. The World War Two significantly altered the social, political and economic factors that made Australia the nation it was - nevertheless this impact created the changes that helped Australia to become the nation it is today. Due to Australia's involvement in the Second World War, aspects of Australia's foreign policy were impacted to a large extent. As evident in Australia's involvement in the Boer War, First World War and the Second World War, Australia's foreign policy perpetually complied with the British foreign policy. When the war broke out, under Menzies leadership, Australia still considered itself very much part of the empire. With Australia's supporting Britain on the European fronts, Britain reassured Australia that if Japan attacked Britain would "cut our losses in the Mediterranean and proceed to your aid." In accordance to Britain's needs and reassurance, Australia sent over half of the Australian navy to the Mediterranean Sea, 27,000 Australians to be involved in Empire Air Training Scheme and troops of the 6th, 7th and 9th divisions of the Australian Imperial Force were sent to the Middle East. After Menzies' forced resignation and the Fadden period, John Curtin, leader of the Labor Party, became Prime Minister in 1941. Curtin steered Australia through most of the war years. ...read more.

Through this policy, the secondary industry was stimulated. With Australia's isolation and difficulty in obtaining international goods in the war; a greater number of goods had to be manufactured, causing Australia to become self-sufficient. The Manpower directorate had a strong impact on wage earners. The government's determination to support the war effort saw an increase in employment opportunities for many Australians which provided increased wages. Within this economic change employment and wages were not only increased as the Curtin government furthered its Commonwealth powers to introduce price controls and heavier taxes. The Uniform Tax Scheme implemented tight controls on prices, wages and taxes. Thus, with this government policy, the increased wage was not as idyllic as once perceived. These controls on wages and prices were announced by Curtin on 11 February 1942 as an act to ensure that there was an equality of sacrifice that was not evident in World War One. The role of women also affected the economic activity of Australia. The government encouraged women to enter the workforce - due to the absence of men and the inability for many industries to perpetuate. The introduction of women into the workforce was one of the greatest social changes influenced by the impact of the war. The idea of married mothers in the workforce was opposed by many people with the idea that the care of children would be negatively affected. The government introduced a new policy granting childcare facilities for women and working hours that would provide sufficient time in the home. Women moved into agricultural industries, secondary industries and occupations previously reserved for men, such as bank tellers. By the end of the war, one in three women under the age of 65 years of age, were in the workforce. The impact of the war saw the beginning of a large influx of women into the workforce. This was a great influence upon the Australian economy, as the economy was maintained in the war years. ...read more.

The use of censorship extended to soldiers letters and posters warning against the dangers of gossip. It also worked to produce a particular image of the enemy - with regular images of Japanese extreme brutality used to portray their, supposed, racial inferiority. Even the government policy of censorship was not appreciated by a majority of Australians. On a social level censorship helped to maintain the war effort. The people were not exposed to particular events in the war, until many years after the war was over - when it became public knowledge. The panic and frantic emotions that were evident throughout Australian society were evident until the clear idea of victory by the Allied forces and the danger of invasion was gone. In 1943 and 1944 people began to resist and resent government control on daily lives for the war effort. Curtin's death in 1945, just one and a half months before the end of the war paved the way for postwar-reconstruction under Prime Minster Joseph Benedict Chifley. The First World War brought the idea of nationalism to Australia; however it was the impact of the Second World War that tested Australia's strength as a nation. Over 540,000 Australians served in the Second World War, with approximately 33,826 died in battle or from war wounds. However, it is the disruption and major changes to Australian society and the economical and political arenas that give an insight to the extent of the impact of the Second World War upon Australia. Women gained more distinctive positions in society, through venturing into employment. Through the introduction of women, the economy's activity was maintained during the war and various social services were introduced. The unity of Australians on the home front allowed Australia to achieve a maximum war effort. The impact of the war challenged the illusion of unlimited protection from Britain. This change in vision created a strong relationship with America. Through the impact of the war, Australia was forced to confront reality and make the political, social and economical decisions that influence the nation she is today. ...read more.