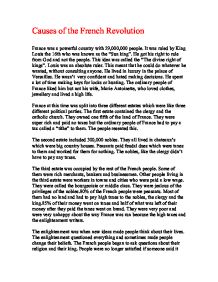 Causes of the French Revolution France was a powerful country with 29,000,000 people. It was ruled by King Louis the 16th who was known as the "Sun king". He got his right to rule from God and not the people. This idea was called the "The divine right of kings". Louis was an absolute ruler. This meant that he could do whatever he wanted, without consulting anyone. He lived in luxury in the palace of Versailles. He wasn't very confident and hated making decisions. He spent a lot of time making keys for locks or hunting. The ordinary people of France liked him but not his wife, Marie Antoinette, who loved clothes, jewellery and lived a high life. France at this time was split into three different estates which were like three different political parties. ...read more.

Most of them had no land and had to pay high taxes to the nobles, the clergy and the king.85% of their money went on taxes and half of what was left of their money after they paid the taxes went on bread. They were very poor and were very unhappy about the way France was run because the high taxes and the enlightenment writers. The enlightenment was when new ideas made people think about their lives. The enlightenment questioned everything and sometimes made people change their beliefs. The French people began to ask questions about their religion and their king. People were no longer satisfied if someone said it was the will of God. They said "the pen is mightier than the sword". Writers like Rousseau, Locke, Voltaire and Montesquieu began to make people think. ...read more.

They couldn't agree so they took a break for lunch. After lunch the nobles and clergy were back before the third estate. The caretaker, thinking that everybody was back, locked the doors, accidentally locking the third estate out. The third estate thought that this was planned by the first and second estates and decided to have their own meeting on the tennis court. Here they all swore an oath to defend France and the civil rights of the French people. King Louis came with his army and ordered them of the tennis court but they refused to move. King Louis left which meant he had accepted the new government. In Paris the main supporters of the new government were a group known as the Sans Culottes. They were mainly shopkeepers, tradesmen and carpenters. They dressed in trousers and were suffering as a bad harvest had pushed up the price of bread. ?? ?? ?? ?? ...read more.