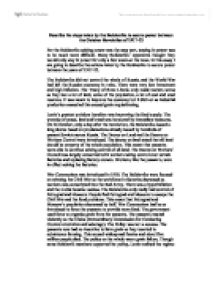 Describe the steps taken by the Bolsheviks to secure power between the October Revolution of 1917-22.

Describe the steps taken by the Bolsheviks to secure power between the October Revolution of 1917-22 For the Bolsheviks seizing power was the easy part, staying in power was to be much more difficult. Many Bolsheviks' opponents thought they would only stay in power for only a few weeks at the most. In this essay I am going to describe the actions taken by the Bolsheviks to secure power between the years of 1917-22. The Bolsheviks did not control the whole of Russia, and the World War had left the Russian economy in ruins. There were very low investment and high inflation. The Treaty of Brest Litarsk only made matters worse as they lost a lot of land, some of the population, a lot of coal and steel reserves. It was meant to improve the economy but it did not as industrial production ceased ad this caused grain requisitioning. Lenin's greatest problem therefore was improving the food supply. The promise of peace, land and bread was honoured by immediate measures. ...read more.

The government used force to organise grain from the peasants. The peasants reacted violently so the Cheka (Extraordinary Commission for Combating Counter-revolution and sabotage). The Policy was not a success. The peasants now had no incentive to farm grain so they resorted to subsistence farming. This caused widespread famine and about five million people died. The policy on the whole was a grain failure. Though some Bolshevik members supported the policy, Lenin realised the regime was in danger. Despite Civil War victory, the Bolsheviks own supporters were turning against them as at the Kronstadt uprising. At Tombov the peasants revolted over grain requisitioning. It took about 5,000 red army troops to surpress the revolt. Lenin realised that to stay in power he must stop all the discontent and that the government could not continue the policy on the war communism. In 1921, the NEP (New Economic Policy) was set up to improve the economy as it is near collapse now. ...read more.

The Bolsheviks also used propaganda to try and gain support. It worked in many circumstances but it led people to not believe the Bolsheviks, as they weren't sure when the Bolsheviks were lying or not. Lenin created a one party state and banned the constituent assembly. This gained some support for the Bolsheviks as people for forced to vote for them, as they had no one else to vote for. This did cause uprisings, as people wanted freedom. I think the most important step was the introduction of the NEP as it gave the peasants more freedom and gained him support of the workers ad peasants. It lost him support though in the Bolsheviks as leading members such as Lenin spoke out and opposed him. This was the wake up for Lenin, as he knew that people were prepared to oppose him, even in his own party. I think the NEP was a success as it solved a lot of major problems that needed solving so I think that the problems solved out weighed the problems caused. ...read more.