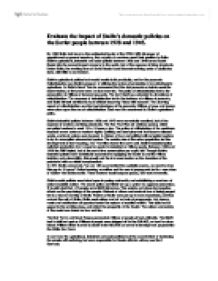 Evaluate the impact of Stalin's domestic policies on the Soviet people between 1928 and 1945.

Evaluate the impact of Stalin's domestic policies on the Soviet people between 1928 and 1945. By 1928 Stalin had become the undisputed leader of the CPSU. With his power of appointment as general secretary, the majority of members owed their position to Stalin. Stalin's agricultural, industrial and social policies between 1928 and 1940 turned Soviet Russia into the second largest economy in the world, but at the expense of living standards. Under Stalin, the working class of Soviet Russia found themselves living under a totalitarian state, with little to no freedom. Stalin's agricultural policies had woeful results both practically, and for the peasants. Collectivisation was Stalin's program of utilizing the factors of production more effectively in agriculture. ...read more.

The Five Year Plan set arbitrary quotas, which compelled workers to work 12 to 14 hours a day. The policy of militarisation of the workforce imposed severe curbs on worker's rights. Quitting and unemployment had become disused words, and trade unions were banned. A mixture of fear and political will compelled workers to try to accomplish astronomical quotas. The sudden rise of the urban population led the development of slum housing. 2 to 4 families shared the same unit. Stalin's industrial policy switched production from consumer goods to industrial or military goods. Between 1928 and 1940 the GNP tripled, but at the same time consumption per capita fell. ...read more.

Posters of Stalin were put up in every household, and thus evolved the cult of Stalin. Stalin used culture and art as tools of propaganda. Art, cinema, music and architecture all operated under the system of socialist realism. This style had to appeal to the working class, and reflect the prosperity of the Soviet. The culture and society of the soviet was based on fear and lies. The Red Terror and Great Purges persecuted millions of people almost arbitrarily. The NKVD had to fulfil set quotas. Millions of people were shipped off to the GULAGS, or front for slave labour. Millions either starved to death in the GULAGS or served in development projects like the White Sea Canal. In summary the agricultural, industrial and social policies had the overall effect of burdening the people with suffering, but were responsible for Russia ultimate victory over n**i Germany. ...read more.