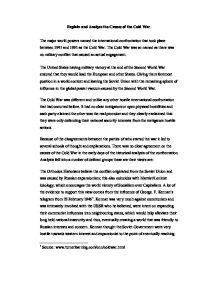 Explain and analyse the causes of The Cold War

Explain and Analyse the Causes of the Cold War. The major world powers named the international confrontation that took place between 1941 and 1991 as the Cold War. The Cold War was so named as there was no military conflict that caused an actual engagement. The United States having military victory at the end of the Second World War ensured that they would lead the European and other States. Giving them foremost position in a world context and leaving the Soviet Union with the remaining sphere of influence in the global power vacuum caused by the Second World War. The Cold War was different and unlike any other hostile international confrontation that had occurred before. It had no clear instigators or open physical hostilities and each party claimed the other was the real provoker and they clearly exclaimed that they were only defending their national security interests from the instigators hostile actions. Because of the disagreements between the parties of who started the war it led to several schools of thought and explanations. There was no clear agreement on the causes of the Cold War in the early days of the historical analysis of the confrontation. Analysis fell into a number of defined groups these are their views are: The Orthodox Historians believe the conflict originated from the Soviet Union and was caused by Russian expansionism; this also coincides with Marxist/Leninist ideology, which encourages the world victory of Socialism over Capitalism. A lot of the evidence to support this view comes from the influence of George. ...read more.

This then left a huge power void in Europe and was quickly filled by the U.S who had been able to grow during the war, with it's economy being able to thrive under conflict compared to the devastation in Europe. Because of the United States' new found prosperity and growth in military power the American leaders were now eager to take centre stage in the World affairs, taking with them the mistakes they'd made and lessons they'd learnt during the Second World War. During World War Two the U.S had been very cautious regarding foreign policy and had not taken part in the League of Nations and hid behind the Monroe doctrine to avoid being involved with the tensions in Europe. The U.S wanted to prevent another wide set conflict and so set about distributing their hegemonic status so it could safeguard it's own national security and help maintain the peace in Europe. Directly after the Second World War the U.S initiated most of the International activity. They saw the unstableness of the balance of power in Europe and also open access to natural resources such as the oil in Persia and other mid-eastern states as paramount to it's national security and to help maintain global peace. The U.S were well aware of the vulnerability of prosperity and stability caused by the depression in World War Two so they approached foreign policy with the view that national security was vital. ...read more.

The intra-state theorists seem to hold a different view in that they believed that the domestic policies of each of the States determines their foreign policy and when there are changes to it, they relate to the movements in internal power relations, economic weakness and alterations in social composition. Finally the class conflict theory, based on Marxist ideology sees class conflict being the main the main instigator of change between the classes and the tensions between the communists and capitalists being expressed between the super powers. This view is similar to the north-south and west-west theorists again showing the main conflicts arising between the rich and the poor. Economics also seems to have been causal to the Cold War with conflicts arising between the rich and the poor States with the rich having all the power because of their economic strength. This again played a part in the capitalist and communist argument between the U.S and Soviets with the U.S want the rich elite to rule where as the Soviets wanted rule by the people for the people. Overall, none of the theories are adequately able to explain the emergence and escalations of the Cold War. However, by combining a lot of the theories together they tend to offer a more adequate explanation as each theory has only looked at a few factors rather than all of them. Evidence has shown that there were many factors that could have helped the development of problems with each fearing the worst from the other and so increasing their own securities that may not have been necessary if they had, had good communications between them. ...read more.