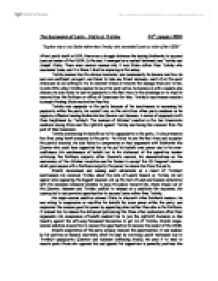 &quot;Explain why it was Stalin rather than Trotsky who succeeded Lenin as ruler of the USSR&quot;

The Succession of Lenin - Stalin or Trotsky 24th January 2004 "Explain why it was Stalin rather than Trotsky who succeeded Lenin as ruler of the USSR" After Lenin's death in 1924, there was a struggle between the leading Bolsheviks to succeed Lenin as leader of the USSR. In the end, it emerged as a contest between Leon Trotsky and Joseph Stalin. There were several reasons why it was Stalin rather than Trotsky who succeeded Lenin, and it is these I shall be exploring in this essay. Trotsky seemed like the obvious successor, and consequently he became inactive. He was over-confident, arrogant, and failed to take any threat seriously, least of all the quiet Stalin and so did nothing to try to discredit Stalin or reverse the damage Stalin did to him. In late 1923, when Trotsky needed to be at his most active, he became ill with a malaria-like disease. ...read more.

He also failed to compromise or heal arguments with Bolsheviks like Zinoviev who could have supported him as he put his beliefs over power due to his over-confidence. His maintenance of beliefs led to his statement of the opposition leaders criticizing the Politburo majority after Zinoviev's removal, his demonstrations on the anniversary of the October revolution and his failure to accept the XV Congress' decision which gave anyone with a Politburo majority the power to remove him from the party. Stalin's deviousness and cunning went unhindered as a result of Trotsky's inactiveness. He deceived Trotsky about the date of Lenin's funeral so Trotsky did not appear while appearing the biggest mourner, set up the Cult of Lenin and became associated with the deceased whenever possible to sway the public towards him. Stalin stayed out of the Zinoviev, Kamenev and Trotsky conflict to emerge as a candidate for succesion. ...read more.

Stalin used this Politburo majority to have Trotsky, as a result of his maintenance of beliefs, removed from the Politburo and any real chance of succeeding Lenin. Stalin used his exploited position to remove Trotsky from the party and dominate the XV Congress which's decision of removing all of Stalin's opponents Trotsky could not accept for his beliefs, and have him exiled to Siberia with no power to succeed Lenin and Stalin with it all. In conclusion, it was a combination of linked factors which resulted in Stalin rather than Trotsky succeeding Lenin. What Trotsky did to loose; Trotsky's inactiveness, his unpopularity with the party caused by his maintenance of strong beliefs. And then what Stalin did to win; Stalin's cunning, single-minded ambition and political exploitation which resulted in the order of events leading to the consequential expulsion of Trotsky from the party and exile to Siberia in 1927, which finally saw Stalin rather than Trotsky succeed Lenin as ruler of the USSR. ...read more.