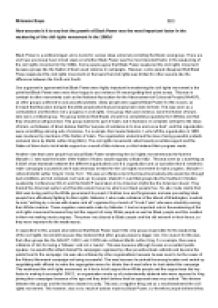 How accurate is it to say that the growth of Black Power was the most important factor in the weakening of the civil rights movement in the 1960s?

They trusted the American system and therefore would never be able to set black people free. He also made claims that MLK was being paid by the White government to preach Christian love and forgiveness and was preventing black people from effectively fighting for their rights. Malcolm X also made criticisms of the March of Washington, in which he said ?nothing by a circus with clowns and all? organised by a bunch of ?Uncle Toms? who were slavishly serving their Whiter masters. These negative comments made by Malcolm X had an important role in the weakening of the civil rights movement because they lost the support of many White people as well as Black people and this resulted in them not making much progress. They were very biased to Black people and this did not work in their favour, so they were important for the weaknesses. In opposition to this, people also believed that Black Power wasn?t the only group responsible for the weakening of the civil rights movement because they believed that other groups played a bigger role. One reason for this was that other groups like the NAACP, SNCC and CORE also criticised Martin Luther King. ...read more.

MLK was from the South and had a very privileged upbringing. This created division in his popularity, as people from the North couldn?t relate to him. This lost support and therefore weakened the civil rights movement. In the South people were still being lynched for simply being Black. Education was legally segregated, which meant black children often had to walk miles to a Black only school, which had limited facilities and was in an unsafe area. There were therefore different issues and it was segregation against discrimination. Northern groups felt that Southern groups could not understand their views because of this division. Neither of these reasons for divisions or weakening had anything to do with Black Power. In conclusion, Black Power was partially responsible for the weakening of the civil rights movement because they promoted violence and undermined the peaceful protests demonstrated by other leaders like MLK. They were also responsible because Malcolm X, their leader criticised MLK, which didn?t show unity and was a weakening factor. However, there were other factors that contributed to the weakening, for example the fact that other groups criticised MLK and that there were divisions between the North and South and therefore Black Power was not the most important reason for the weakening of the civil rights movement in the 1960s. ...read more.