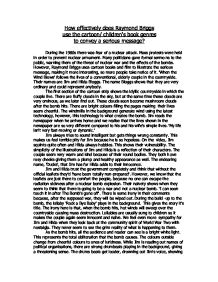 How effectively does Raymond Briggs use the cartoon/ children's book genres to convey a serious message?

How effectively does Raymond Briggs use the cartoon/ children's book genres to convey a serious message? During the 1980s there was fear of a nuclear attack. Mass protests were held in order to prevent nuclear armament. Many politicians gave formal sermons to the public, warning them of the threat of nuclear war and the effects of the bombs. However, Raymond Briggs uses cartoon books and film to illustrate the serious message, making it more interesting, so more people take notice of it. 'When the Wind Blows' follows the lives of a conventional, elderly couple in the countryside. Their names are Jim and Hilda Bloggs. The name Bloggs shows that they are very ordinary and could represent anybody. The first section of the cartoon strip shows the idyllic countryside in which the couple live. There are fluffy clouds in the sky, but at the same time these clouds are very ominous, as we later find out. These clouds soon become mushroom clouds after the b**b hits. There are bright colours filling the pages making their lives seem cheerful. ...read more.

Their naivety shows when they seem to think that there is going to be a war and not a nuclear b**b. 'I can soon touch it in after The b**b's gone off'. There is some irony in their comments because, after the supposed war, they will be wiped out. During the build-up to the b**b, the lullaby 'Rock a Bye Baby' plays in the background. This gives the story it's title. The irony here is that, when the b**b hits, hot winds will sweep over the countryside causing mass destruction. Lullabies are usually sung to children so it makes the couple again seem innocent and na�ve. We feel even more sympathy for Jim and Hilda when they look back at the community spirit of World War Two with nostalgia. They never seem to see the grim reality of what is happening to them. As the b**b hits, all the audience and reader can see is a bright white light. This represents the total obliteration that the b**b causes. ...read more.

During the aftermath of the b**b, both Hilda and Jim have fantasies. We feel sympathy for them here because their childish fantasies make them seem innocent. As the glass shatters, Hilda sees her past in the pieces of glass, which is shattered before her very eyes. This gives her character a past so we feel great pity on her, because we know she is going to die. It also seems like her life flashing before her eyes, something which people associate with the arrival of death. In both the film and book, the death of Jim and Hilda is not shown. In the book the last pages are brown, showing no hope for the couple, whereas in the film version, there is a close-up of the bunker and it rises into the sky, appearing as the sun. This gives a sense of hope, because it shows that Jim and Hilda have gone to heaven. I think that the way Raymond Briggs has used the cartoon book genre to convey a serious message works really well. It is very moving and rouses the sympathy of both reader and audience. Jordanne Young U5A ...read more.