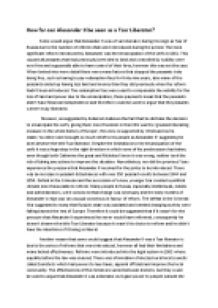 How far can Alexander 11 be seen as a Tsar Liberator?

﻿How far can Alexander II be seen as a Tsar Liberator? Some would argue that Alexander II was a Tsar Liberator during his reign as Tsar of Russia due to the number of reforms that were introduced during the period. The most significant reform introduced by Alexander was the emancipation of the serfs in 1861. This caused all peasants that had previously been tied to land and controlled by nobility were now free and supposedly able to have control of their lives; however this was not the case. When looked into more detail there were many factors that stopped the peasants truly being free, such as having to pay redemption fees for forty nine years, also many of the peasants ended up having less land and money than they did previously when the reform hadn?t been introduced. The redemption fees were used to compensate the nobility for the loss of land and power due to the emancipation; these payments mean that the peasants didn?t have financial independence and therefore could be used to argue that the peasants weren?t truly liberated. However, as suggested by Anderson believes the fact that he did take the decision to emancipate the serfs, giving them more freedom in their life was the ?greatest liberating measure in the whole history of Europe?, this view is supported by ...read more.

Nonetheless the Zemstva?s were nearly always nobility meaning that the power still remained in the hands of those supporting the traditionalist methods of running Russia and they were a way for Alexander II to please the local nobility who had lost land during the emancipation of the serfs, rather than a genuine attempt at a more liberal government. Furthermore the provisional governor could overrule all zemstva decisions, the zemstva were permanently short of money, which limited their practical options, and the voting system was heavily weighted towards local landowners, which made it easy for the conservative nobility to dominate assemblies. Further reforms were made to the education system. Schools became more available to all classes including women with more schools being opened, and thanks to the power of the zemstva the standard of teaching increased. Important university reforms meant that universities were given much greater power in their affairs: lectures on European law and philosophy were allowed, scholars were allowed to study abroad and liberal professors replaced many of the conservatives that had previously existed. Furthermore, poor students did not have to pay fees, and by 1859 2/3 of students at Moscow University were exempt from fees. However in 1861 many universities were closed as they were prosecuted for criticising the regime and causing the increasing revolutionary activity. ...read more.

To conclude, the judgement on whether Alexander II can be seen as a Tsar Liberator would be that fundamentally he was a traditionalist who was pressured into making liberal reforms. The objectives behind all the reforms made by Alexander II were to retain his autocracy, which he felt could only be done if he pleased the growing opposition within Russia, hence the reforms made. The humiliation of the Crimean war had revealed weakness and corruption, and it was clear that something needed to change in order for Russia to keep with the Great European powers, therefore it can be argued that Alexander II isn?t a Tsar liberator and all he cared about was retaining his power. It can?t be denied that the emancipation of the serfs didn?t have an effect on the shaping of Russian history, but it can be argued that it wouldn?t have mattered who was in power, this was the only option Alexander II had in his circumstances, also the other reforms that were introduced all had limitations that made them less liberal, and the following of the reactionary period towards the end of his reign before being assassinated eliminated some of the liberal progress that had been made, overall making it a weak argument to say that Alexander II was a Tsar liberator. ...read more.