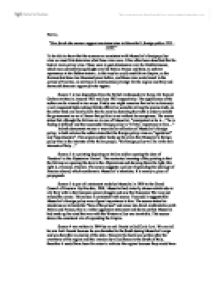 Part A; "How far do the sources suggest consistent aims in Mussolini's foreign policy 1922-1939?" To be able to show that the sources are consistent with Mussolini's foreign policy aims we must first determine what these aims were. It has often been described that he had six main policy aims. These were to gain dominance over the Mediterranean, which was currently being fought over by Britain France and Italy, to achieve supremacy in the Balkan nations, in this way he could establish an Empire, as the Romans had done two thousand years before, and these aims would result in the spread of Fascism, an increase in international prestige for the regime and Italy and increased domestic support for the regime. Source 1 is two dispatches from the British Ambassador to Rome, Sir Ronald Graham written in January 1923 and June 1923 respectively. The significance of the author can be viewed in two ways. Firstly one might conceive that as he is obviously a well-respected high-ranking British official he would be telling the precise truth, on the other hand one may believe that he may be distorting the truth in order to satisfy the government as we all know that politics is not without its corruptness. ...read more.

By this date, 1939, Mussolini had virtually chosen which side to ally Italy with in the European power struggle and saw that European War was just around the corner. This source is consistent with source 1 because it suggests that Mussolini's foreign policy was of great importance to him. The source states his intentions are to break the "bars of the prison" and come into direct confrontation with Britain and France; this is a rather aggressive statement and shows us that Mussolini had made up his mind that war with the Western allies was inevitable. This source shows the consistent aim of expanding the Empire. Source 4 was written in 1944 by an anti-Fascist called Carlo Levi. We can tell he was Anti-Fascist because he was banished to the South during Mussolini's reign and was therefore an enemy of the state. However the book was written after the overthrow of the regime and the invasion by allied forces to the South of Italy, therefore it would have been far easier to criticise the regime because they would have no fear of repercussions. ...read more.

Of coarse this is not true; it is merely obtuse wording for the war pursuit which both nations hope to continue. This source is consistent with the policy aim of increasing international prestige and establishing an Empire, also by doing both these things Mussolini hoped to increase domestic support. All six sources show us that there is a wide range of judgment about Mussolini's foreign policy. The sources have been written and spread over a long period of time and interlink with vital events in the history of Fascism. In general the sources are consistent with Mussolini's aims however there are a few complications which I have stated above. All the sources either portray war or show Mussolini's intentions for war and this gives us an insight into Mussolini's thinking that he was prepared, indeed saw it as just, to take Italy to war to make them great. Mussolini's only inconsistent policy is that of which side to ally himself with before a war on the continent broke out, there are many swings of loyalty and I believe that Mussolini, just like the Liberals before him, wanted to see which side would come out victorious before choosing. ...read more.