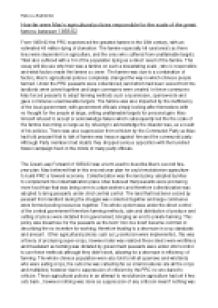 How far were Maos agricultural policies responsible for the scale of the great famine between 1958-62?

﻿Rebecca Badminton How far were Mao?s agricultural policies responsible for the scale of the great famine between 1958-62 From 1958-62 the PRC experienced the greatest famine in the 20th century, with an estimated 45 million dying of starvation. The famine especially hit rural area?s as there lives were dependent on agriculture, and the ones who suffered from unattainable targets. Tibet also suffered with a 1/4 of the population dying as a direct result of the famine. This essay will discuss why their was a famine on such a devastating scale , who is responsible and what factors made the famine so sever. The famine was due to a combination of factors, Mao?s agricultural policies completely changed the way in which chinese people farmed. Under the PRC peasants were collectivized, land which had been seized from the landlords were joined together and large communes were created. In these communes Mao forced peasants to adopt farming methods such a lysenkoism, sparrow-cide and gave communes unachievable targets. The famine was also impacted by the inefficiency of the local government, with government officials simply looking after themselves with no thought for the people at large, setting unattainable targets for personal gain. Mao himself refused to accept or acknowledge failure which subsequently led the the scale of the famine becoming so large as by refusing to acknowledge the disaster was, as a result of his policies. ...read more.

Local officials were also responsible in allowing the famine become a disaster, at every level officials lie and exaggerated.No commune wished to admit that it had met met the targets set by Mao. Due to Mao?s rule through terror the tragedy deepened even though many government officials were aware of the fact that people were dying in there millions, they would report back to Mao that production targets were being met and the great leap forward was on course. Officials became immune to the suffering, looking after themselves without a though for the people at large. By reporting that production targets were being met the government collecting crops for urban area?s and to sell for surplus which were needed for peasants to eat. Mao also suppressed all forms of criticism, with the refusal to listen to the truth, allowing the famine to continue. At the Lushan Conference 1959, Pen dehaui spoke of what he witnessed of the peasants and famine however no one backed him to confirm the truth, showing the extent of Mao?s terror. This was because the 100 flower campaign fresh in the minds of many officials officials feared to criticize Mao, believing they would be accused of going against the state by criticizing Mao agricultural reforms it created fear to criticism Mao. Although conference was held to consider great leap forward, as delegates did not confess famine therefore nothing as done to help the situation. ...read more.

There were also economic reforms that also damaged the country and led to peasants suffering, Maos believe that by mass producing steel it would solve economic problems. Mao therefore called for all people to participate in the production of steel by building ?backyard furnaces? however, this steel was worthless and were unusable in ay practical way. Authorities knew this but dare not let on,the same way as agricultural reforms. This affected peasants as wasted steel and did not see economic problems solved. In conclusion although agricultural policies directly was a cause of the famine, with collectivization leading to private farming ceasing ,and therefore no incentive for peasants and lysenkoism decreasing the quality of produce, if Mao had directly accepted failure and tackled the problem the famine would not of grown to the extent it did. We can not however put all the blame on Mao as it was the inefficiency of local officials and government advisers who due to suppression of criticism did not accept responsibility for the peasants. Mao rule by terror, with the 100 flower campaign fresh in the minds of officials led to a ill-advised leader with delegates refusing to criticize Mao. Therefore although agricultural policies were disatorious if Mao had not created a climate of terror and fear through ruling and didn't let his refusal to accept failure get in the way of the death of million, the great famine would not of grown to the extent of 45 million deaths. ...read more.