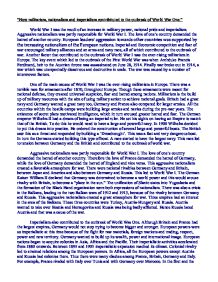 &quot;How militarism, nationalism and imperialism contribituted to the outbreak of World War One.&quot;

This race led to tension between Germany and the British and contributed to the outbreak of world war. Aggressive nationalism was partly responsible for World War I. The love of one's country demanded the hatred of another country. Therefore the love of France demanded the hatred of Germany, while the love of Germany demanded the hatred of England and vice versa. This aggressive nationalism created a favorable atmosphere for war. There were national rivalries between Germany and Britain, between Japan and America and also between Germany and Russia. This led to World War I. The German Kaiser William II declared that Germany was determined to become a world power and this would arouse rivalry with Britain, to become a "place in the sun." The unification of Slavic states into Yugoslavia and the formation of the Black Hand organization were both expressions of nationalism. There was also a crisis in the Balkans, leading to the two Balkan wars of 1912 and 1913, because of the rivalry between Germany and Russia. This aggressive nationalism created a great atmosphere for war. ...read more.

World War I was the result of an increase in military power, national pride and imperialism. Nationalism led European nations to compete for the largest army and navy, or the greatest industrial development. It also gave people the idea of forming independent nations of their own. Strong feelings of nationalism fed the fires of hatred in pre-war Europe. Another cause was that European nations ruled smaller countries, called colonies, and competed with each other to accumulate more colonies, otherwise known as imperialism. One of the main causes of World War I was the ever-rising militarism in Europe. There was a terrible race for armaments after 1870, throughout Europe. Though these armaments were meant for national defense, they created universal suspicion, fear and hatred among nations. The key event which led to the outbreak of the First World War took place on June 28, 1914. On that day, the Archduke Francis Ferdinand, heir to the Austrian throne, and his wife were shot dead by a young Serbian nationalist of the Black Hand at Sarajevo. The affects of World War One will always be with us and three reasons for the outbreak of this war were; the increase in militarism, the patriotism and nationalism and imperialism. ...read more.