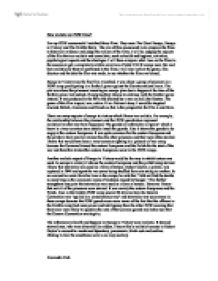 How realistic are POW films?

How realistic are POW films? For my POW coursework I watched three films. They were The Great Escape, Escape to Victory and The Colditz Story. The aim of this coursework is to compare the films to historical evidence and judge the realism of the films. I will be judging the aspects of the film that are realistic and unrealistic, such as health and hygiene, activities, psychological aspects and the shortages. I will then compare what I see on the films to the sources to get a completely reliable overview of what P.O.W camps were like and how realistically they are portrayed in the films. I will also look at the genre, film director and the date the film was made, to see whether the films are biased. Escape to Victory was the first film I watched. I was about a group of prisoners in a POW camp participating in a football game against the German national team. The plot was about the prisoners inventing an escape plan due to happen at the time of the football game, but instead of escaping they choose to continue with the football game instead. It was produced in the 80's and directed by a man called John Huston. The genre of this film is sport, war, action. It is a fictional story. I would be targeted towards British, Americans and French as that is the perspective the film is cast from. There are many aspects of escape to victory which I know are realistic. For example, the relationship between the prisoners and the POW guards does represent realistically what may have happened. The guards are referred to as 'goons' which I know is a very common term used to insult the guards. Also it shows the guards to be angry at the eastern Europeans. It was quite common for the eastern Europeans and the polish to have smaller rations than the other prisoners and they were often starved. ...read more.

Meaning that to show the prisoners in one set of clothing throughout the film would be good in comparison to the shortages and conditions endured in the POW camps. The health and hygiene conditions shown in the films were very similar to the descriptions in the sources, such as A1, A4 and B6. It shows the living conditions very cramped with lots of people sleeping in the same bedroom, which I know is realistic as the sources describe the camps very similarly as the camps were sometimes shown in the films with diseases like scabies and diarrhoea being caught due to overcrowding and unclean conditions. However source B3 does mention how the conditions in Colditz were better that the other camps and I do see this being portrayed fairly in the films. Another aspect which is shown realistically in Colditz Story is the activities the prisoners participated in. it shows roll call effectively and realistically being carried out in which the routine is the same as when described in the sources. It shows exercise and ball games being carried out in the yard which I know from the sources is realistic, also it shows aspects which are needed for escape plans such as lock picking and forging which according to source B4 'did not form any part of the curriculum for officer training' 'yet as a POW one had to become a master of al these arts.' Despite all of the realistic elements there are also a few unrealistic elements in Colditz Story. Firstly the German prisoner of war guards were portrayed as dim-witted which is unrealistic. Even if there were a few slightly 'dim-witted' guards they cannot all have been 'fat and stupid' as the film director has portrayed the stereotypical POW guard.. I think they were portrayed like this because the target audience is mainly British people whom after only ten years may still be feeing quite bitter and resentful towards the Germans. ...read more.

I think that the director wanted to include this relationship between the guards and prisoners because from the perspective of the target audience they would want to see the German guards ridiculed. Furthermore whilst in isolation the prisoners were allowed to communicate with each other. Realistically this would not have been allowed to happen. As shown in all of the films isolation is solitary and it would not have been allowed to communicate through the chambers of isolation. Also Steve McQueen was allowed to take in his sports equipment into the isolation with him. This is even more unrealistic as he would not have been allowed entertainment during his isolation period. The final unrealistic aspect of The Great Escape would be the fact that hot showers and cigarettes were available. Many camps didn't even have running water; source A1 tells us how the running water got contaminated by the toile water, showing that there was a shortage of water. I think the scenes created were for entertainment purposes only and were not for informative reason. In conclusion I think that The Colditz Story is the most realistic as it is set in the Colditz castle where the prisoner of war camps was actually based. In terms of actual overall realistically Colditz story has more realistic aspects than non-realistic aspects making it the most realistic. The least realistic film was Escape to Victory. It had few realistic aspects and I believe it was directed more for entertainment purposes than to show the conditions of the POW camps. It had more unrealistic points than realistic points. In each film the aspect which was portrayed most realistically was the appearance of the camps. I think this is more for the purpose of setting the scene than for informative reasons. I think that Colditz Story is useful as historical evidence as it portrays the conditions of the camps well. However the other two films would not be as reliable as Colditz Story as they were more for entertainment purposes than for informative reasons. Alexandra Fish ...read more.