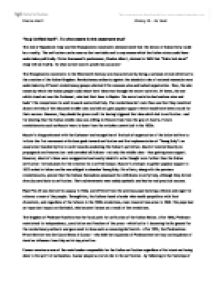 &quot;Italy Unified Itself&quot;. To what extent is this statement true?

Bianca Nardi History HL - Mr Nash "Italy Unified Itself". To what extent is this statement true? The end of Napoleonic Italy and the Risorgimento movements demonstrated that the dream of Italian Unity could be a reality. The unification can be seen as the inevitable end to any means which the Italian states could have undertaken politically. Victor Emmanuel's predecessor, Charles Albert, claimed in 1849 that "Italia far� da s�" (Italy will do itself)). To what extent was his prediction accurate? The Risorgimento movements in the Nineteenth Century are characterized by being a national revival which led to the creation of the Italian Kingdom. Revolutionary outbursts against the absolutist rule of restored monarchs were undertaken by different revolutionary groups who had little common aims and lacked organization. Thus, the sole means by which the Italian people could share their ideas was through the secret societies. Of these, the one which stood out was the Carbonari, who had their base in Naples. The secret societies had unclear aims and hadn't the competence to work towards and united Italy. The revolutionaries' main flaw was that they consisted almost entirely of the educated middle class and did not gain popular support which would have been crucial for their success. However, they should be given credit for having triggered the ideas which led to unification - and for showing that the Italian middle class was willing to liberate Italy from the grip of Austria. ...read more.

Cavour played a crucial role in the unification - by following in the footsteps of previous revolutionaries and taking drastic and immediate actions towards the creation of a nation. Cavour sent the Sardinian army to the aid of France and England in the Crimea, which raised Italy's prestige from the point of view of the western powers. In the Congress of Paris, Cavour attacked Austria diplomatically and broke the Alliance between Austria and Britain, gaining British support for the unification. He was responsible for Napoleon III's entry into Italy, which broke the power of Austria and kept Italy free from interference while Garibaldi won the kingdom of Naples for Italy. According to the historian AJ Whyte, Cavour remained "uninfluenced by the squabbles and jealousies of the various Italian states, and viewed Italy and the Italian question as a single problem". Additionally, he broke Italy free of Austrian interference which had been a great barrier to unification. Italy undoubtedly benefited from Cavour's exceptional leadership skills. Although it may be claimed that Cavour acted solely on the pretext of expanding Piedmont's territory, his intentions seem insignificant as by chance or by destiny, they led to the unification of Italy - confirming the statement that Italy united itself. Giuseppe Garibaldi had made appearances during the Risorgimento, and in 1860 he seized southern Italy from the Bourbons and in a gesture of pure patriotism made it a gift to King Victor Emmanuel in order to create the united kingdom of Italy. ...read more.

Catholics" and yet to support "the national susceptibilities of the Italian revolutionists -- a double aim which explains many an inconsistency" in his policy. Regardless of his inconsistencies, Napoleon III was of great influence in the unification of Italy - especially as he was responsible for the elimination of the greatest obstacle for Cavour: Austrian influence on the Italian states and Piedmont. Prussia's wars with Austria in 1866 and with France in 1870-71 helped with the unification of Rome and Venetia to Italy. During the Franco-Prussian war, Bismark is able to get Napoleon III to remain neutral and in turn gives Venetia to Italy. The war forces Napoleon III to remove troops from Rome, which in turn made the unification of Rome to the rest of Italy possible. In virtue of the facts mentioned above, it becomes evident that foreign support did influence the creation of Italy. However, Charles Albert's affirmation that Italy would unite itself isn't entirely incorrect. Cavour worked on the assumption that Austria was the main obstacle in the expansion of Piedmont and thus sought foreign help to expel the foreigner. It was Garibaldi, however, who extended the process of unification well beyond Cavour's original projection of an enlarged Piedmont, and in this sense it can be argued that Italy completed itself. The foreign interventions were side effects of other Wars or events and had no specific intention to unite Italy for the sake of patriotism. ...read more.