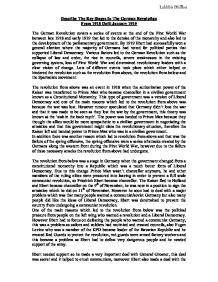 Describe The Key Stages In The German Revolution From 1918 Until January 1919 The German Revolution covers a series of events at the end of the First World War between late 1918 and early 1919 that led to the demise of the monarchy and also led to the development of the parliamentary government. By 1919 Ebert had successfully won a general election where the majority of Germans had voted for political parties that supported Liberal Democracy. Various factors led to the German Revolution such as the collapse of law and order, the rise in councils, severe weaknesses in the existing governing system, loss of First World War and determined revolutionary leaders with a clear vision of change. Lots of different events took place which either helped or hindered the revolution such as the revolution from above, the revolution from below and the Spartacists movement. The revolution from above was an event in 1918 when the authoritarian power of the Kaiser was transferred to Prince Max who became chancellor in a civilian government known as a Constitutional Monarchy. ...read more.

Due to this change Prince Max wasn't chancellor anymore, he and other members of the ruling elites were pressured into leaving in order to prevent a full scale communist revolution, so Friedrich Ebert became chancellor. The Kaiser fled to Holland and Ebert became chancellor on the 9th of November, he was now in a position to sign the armistice which he did on 11th of November. However he soon had to deal with a major problem which was that many people wanted a communist/soviet Germany but also many people did like the ideas of Liberal Democracy, Ebert was determined to prevent the country from undergoing a communist revolution. One of the main reasons which led to the revolution from below was the political pressure from people on the left wing who wanted a revolution and a Liberal Democracy. However Ebert had to focus on defeating the people who wanted a communist Germany, this was a problem as sailors and soldiers had mutinied and created councils, also Eugen Levine who was a member of the KPD became leader of the Bavarian Republic and he created Red Guards to protect the revolution, red guards were armed factory workers and this became a problem as Ebert had to defeat very dangerous people and he needed support of the army. ...read more.