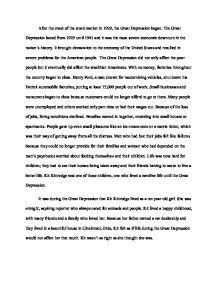 Kit Kittredge and the great depression

After the crash of the stock market in 1929, the Great Depression began. The Great Depression lasted from 1929 until 1941 and it was the most severe economic downturn in the nation's history. It brought devastation to the economy of the United States and resulted in severe problems for the American people. The Great Depression did not only affect the poor people but it eventually did affect the wealthier Americans. With no money, factories throughout the country began to close. Henry Ford, a man known for modernizing vehicles, shut down his Detroit automobile factories, putting at least 75,000 people out of work. Small businesses and restaurants began to close because customers could no longer afford to go to them. Many people were unemployed and others worked only part-time or had their wages cut. Because of the loss of jobs, living conditions declined. Families moved in together, crowding into small houses or apartments. People gave up even small pleasures like an ice cream cone or a movie ticket, which was their way of getting away from all the distress. Men who had lost their jobs felt like failures because they could no longer provide for their families and women who had depended on the men's paychecks worried about feeding themselves and their children. ...read more.

She and her friend, Lauren, played it every day in Kit's tree house to get away from everything. They would also play house and pretend that their dolls were their children. Every time they would play house, Lauren would pretend she still lived in her house that was foreclosed and Kit would pretend that her father still owned the car dealership. During the Depression, Kit's family still had money, unlike Lauren's family who had nothing. Kit knew that Lauren's family was affected more by the Depression than she was and wanted to make Lauren feel happier, not depressed and sad all the time. It was close to Christmas and Kit was writing down everything she wanted. She knew her mom couldn't afford much so she did not write too much on the list. Lauren was writing down what she wanted for Christmas and all she wrote was "A doll." Lauren didn't have any dolls; she had to sell them so that her family could have some money. All of the dolls she played with were Kit's, so all she wanted was one of her own. Kit gave her list to her mother and her mother smiled and said "I will try my hardest to get you what you want Sweetie." ...read more.

He and the government are thinking of ways to create more jobs and get us out of this mess," answered Kit. "Who is Franklin Delano Roosevelt? I've been hearing about him around town lately," said Jason, another neighbor of Kit. "Well, Franklin Delano Roosevelt is running against Hoover in the next election. He is a democrat who ran for Vice President in 1920 but lost. He does not want to deny the existence of the Depression like Hoover, he wants to overcome it." After hours of telling information to many neighbors, strangers and friends Kit managed to make enough for the doll Lauren wanted. She did not tell Lauren that she raised enough money for the doll or that she was going to go out and buy it herself because she wanted it to be a surprise. It was Christmas morning, Kit and Lauren walked down stairs. Lauren was only walking downstairs to accompany Kit and Kit was only walking downstairs to see the reaction of Lauren when she saw the doll Kit bought for her. Kit handed Lauren the nicely wrapped doll and Lauren's mouth dropped. Lauren ripped open the wrapping paper and started to tear. She looked at Kit and said "Thank you Kit, this is the best Christmas I have ever had." ...read more.