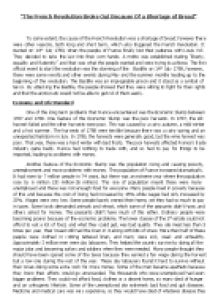 The French Revolution Broke Out Because Of a Shortage of Bread Discuss.

﻿?The French Revolution Broke Out Because Of a Shortage of Bread? To some extent, the cause of the French Revolution was a shortage of bread; however there were other reasons, both long and short term, which also triggered the French Revolution. It started on 14th July 1789, when the people of France finally lost their patience with Louis XVI. They decided to take the law into their own hands. A motto was established stating ?liberty, equality and fraternity? and that was what the people wanted and were trying to achieve. The first official event to start the revolution was the storming of the Bastille on 14th July 1789, however, there were some revolts and other events during May and the summer months leading up to the beginning of the revolution. The Bastille was an impregnable prison and it stood as a symbol of terror. By attacking the Bastille, the people showed that they were willing to fight for their rights and that the aristocrats would not be able to get rid of them easily. Economy and Life Standard One of the long term problems that France encountered was the Economic Slump between 1787 and 1789. One feature of the Economic Slump was the poor harvests. In 1787, the silk harvest failed and the other harvests were poor. This was caused by a rainy autumn, a mild winter and a hot summer. The harvests of 1788 were terrible because there was a rainy spring and an unexpected hailstorm in July. ...read more.

His refusal angered the people, giving them more reasons to fight for their rights. Power The people of France were divided onto 3 sections forming a hierarchy. In the 1st estate, there were rich clergy, in the 2nd estate there were rich nobles who fought for the King, and the 3rd estate consisted of everybody else, such as farmers and peasants. The 1st and 2nd estates made up 3% of the population, while the 3rd estate made up 97% of it. The King was at the top of the hierarchy as he ruled over everyone. This was how the hierarchy was supposed to work. By the late 18th century, the third estate had split themselves into groups according to their jobs and positions. Some examples of these groups are the landless labourers and the urban workers. The middle class (part of the 3rd estate) had risen to a level almost equal to that of the 1st and 2nd estates, but they were still viewed as members of the 3rd estate. The other estates were almost the same as they were before, with perhaps a few minor changes. Absolute monarchy was used in the Ancien Regime. It meant that the King and Queen had total power. The monarchs did not have a Parliament or any other political parties, but they had advisors to help them rule. Louis and Marie were young and unprepared for the responsibilities of monarchy, but they took advantage of the absolute monarchy. They moved out of Paris and lived in their castle in Versailles. ...read more.

Without one of them or any of the events that happened, France would not be the same, and for this they all deserve credit. I think the peasants played one of the most important parts in the revolution because they started it with their violence, terror and threats. The middle class also had a significant role because they were likely to have been involved in the Estates General and the National Assembly. They challenged the higher classes and helped bring on the Era of Enlightenment as well as encouraging change. Before the revolution, France was described as being ruled by the Ancien Regime because it was ruled by absolute monarchy. After the revolution, the lower classes thought they had achieved great changes. They felt the country was much fairer, but the aristocrats did not feel as happy about these changes because many of their privileges had been taken away. I think that some of the most important causes were the Estates General and the National Assembly, and the economic problems such as debt, poverty and unemployment. To help his country, I think Louis should have reduced his expenditure, improved the tax system and taxed people according to their wealth. He should not have moved away from Paris and if he had to, he should have kept an eye on the situation rather than neglecting it. The shortage of bread was one of the causes of the French Revolution, but it was not the only cause. It was all the events that happened in France before the revolution that triggered it. ...read more.