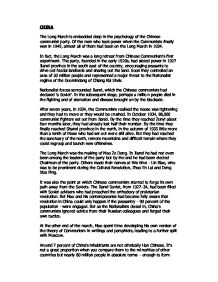 The Long March is embedded deep in the psychology of the Chinese communist party. Of the men who took power when the Communists finally won in 1949, almost all of them had been on the Long March in 1934.

CHINA The Long March is embedded deep in the psychology of the Chinese communist party. Of the men who took power when the Communists finally won in 1949, almost all of them had been on the Long March in 1934. In fact, the Long March was a long retreat from Chinese Communism's first experiment. The party, founded in the early 1920s, had siezed power in 1927 Jianxi province in the south east of the country, encouraging peasants to drive out feudal landlords and sharing out the land. Soon they controlled an area of 50 million people and represented a major threat to the Nationalist regime of the Guomindang of Chiang Kai Shek. Nationalist forces surrounded Jianxi, which the Chinese communists had declared 'a Soviet'. In the subsequent siege, perhaps a million people died in the fighting and of starvation and disease brought on by the blockade. After seven years, in 1934, the Communists realised the noose was tightening and they had to move or they would be crushed. In October 1934, 86,000 communist fighters set out from Jianxi. By the time they reached Zunyi about four months later, they had already lost half their number. By the time they finally reached Shanxi province in the north, in the autumn of 1935 little more than a tenth of those who had set out were still alive. But they had reached the sanctuary of the north, remote mountains and difficult terrain where they could regroup and launch new offensives. The Long March was the making of Mao Ze Dong. In Jianxi he had not even been among the leaders of the party but by the end he had been elected Chairman of the party. Others made their names at this time - Lin Biao, who was to be prominent during the Cultural Revolution, Zhou En Lai and Deng Xiao Ping. It was also the point at which Chinese communism started to forge its own path away from the Soviets. ...read more.

Now I know why the priest who seeks Repose Freehs his heart by first shaving his head. When the Communists won China's civil war in 1949, sending Chang Kai Shek and two million Nationalist refugees scurrying over the water to Taiwan, the United States went into shock. It may have been Richard Nixon who popularised the domino theory, but it was around before him - the world's most populous nation had fallen to the Red scourge and the whole of east Asia was under threat. China's new rulers, in the heat of revolution, immediately attacked American troops militarily as the two countries lined up on opposite sides of the 1950-53 Korean War. It was to be another 20 years before President Richard Milhouse Nixon - shortly before he became famous for something else I can't quite remember - opened diplomatic ties in 1972. Here's a very potted history of ties since then. February 1972 - Nixon visits China and signs the Shanghai Joint Communique declaring that there is only one China and that Taiwan is part of China. December 1975 - President Gerald Ford visits China. January 1979 - China and the United States establish diplomatic relations after President Jimmy Carter switches recognition to Beijing from Taipei. Chinese leader Deng Xiaoping visits the United States and wins American hearts by donning a cowboy hat at a Texas rodeo. January 1984 - Premier Zhao Ziyang visits the United States. President Ronald Reagan visits China and in the following year Chinese President Li Xiannian makes visits the United States. February 1989 - President George Bush visits China. He invited to a banquet several intellectuals identified with China's dissident movement. June 1989 - Relations nosedive after China's army crushes pro-democracy protests in Beijing's Tiananmen Square, killing hundreds. 1992 - Bill Clinton attacks incumbent president George Bush during the election campaign for not taking a harder line over China. ...read more.

Since then, the movement has undergone several massive upheavals: the Great Leap Forward in the 1950s, the Cultural Revolution in the 1960s and economic reform beginning in the late 1970s. What next? Mao Ze Dong gave an interview to the American journalist Edgar Snow in 1964, shortly before he launched his Cultural Revolution. Snow, a fluent Chinese speaker, wasn't allowed to take notes but was allowed to use this official transcript. In it, what he says appears as direct quotes while what Mao says is a paraphrase. This extract comes from the Penguin Book of Interviews, published in 1994. "'You have fundamentally changed the environment in China. Many wonder what the younger generation bred under easier conditions will do. What do you think about it?' He also could not know, he said. He doubted that anyone could be sure. There were two possibilities. There could be continued development of the revolution towards Communism, the other possibility was that youth could negate the revolution, and give a poor performance: make peace with imperialism, bring the remains of the Chang Kai Shek clique back to the mainland, and take a stand beside the small percentage of counter-revolutionaries still in the country. Of course he did not hope for counter-revolution. But future events would be decided by future generations, and in accordance with conditions we could not foresee. From the long-range view, future generations ought to be more knowledgeable than we are, just as men of the bourgeois-democratic era were more knowledgeable than those of the feudal ages. Their judgement would prevail, not ours. The youth of today, and those to come after them would assess the work of the revolution in accordance with values of their own. Mao's voice dropped away and he half closed his eyes. Man's condition on this earth was changing with ever increasing rapidity. A thousand years from now all of them, he said, even Marx, Engels and Lenin, would possibly appear rather ridiculous." ...read more.