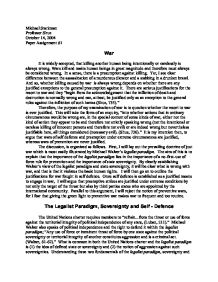 The purpose of my examination of war is to question whether the resort to war is ever justified.

Michael Starkman Professor Shue October 14, 2004 Paper Assignment #1 War It is widely accepted, that killing another human being intentionally or carelessly is always wrong. Wars kill and maim human beings in great magnitude and therefore must always be considered wrong. In a sense, there is a presumption against killing. Yet, I see clear difference between the assassination of a murderous dictator and a stabbing in a drunken brawl. And so, whether killing caused by war is always wrong depends on whether there are any justified exceptions to the general presumption against it. There are serious justifications for the resort to war and they "begin from the acknowledgement that the infliction of death and destruction is normally wrong and can, at best, be justified only as an exception to the general rules against the infliction of such harms (Shue, 735)." Therefore, the purpose of my examination of war is to question whether the resort to war is ever justified. This will take the form of an enquiry, "into whether actions that in ordinary circumstances would be wrong are, in the special context of some kinds of war, either not the kind of action they appear to be and therefore not strictly speaking wrong (not the intentional or careless killing of innocent persons and therefore not evil) or are indeed wrong but nevertheless justifiable here, all things considered (necessary evil). (Shue, 736)." It is my intention then, to argue that wars of self defence and preemption under extreme circumstances are justified, whereas wars of prevention are never justified. The discussion, is organized as follows. First, I will lay out the prevailing doctrine of just war which is most easily illustrated by Michael Walzer's legalist paradigm. The aim of this is to explain that the importance of the legalist paradigm lies in the importance of a no-first-use of force rule for prevention and the importance of state sovereignty. ...read more.

(Walzer, 62)." Thus, preemptive strike against aggression is much alike a "reflex action (Walzer,75)." where action is an absolute necessity for the preservation of sovereignty. Therefore, I agree with Walzer, in that preemptive strikes waged against imminent threat are acts of self defence and morally permissible. Walzer later revises the legalist paradigm to include permissible preemptive strike against threats that are "absent of any immediate intention to launch such an attack or invasion. (Walzer, 85)." I reject this relaxed revision of the legalist paradigm, for such a doctrine lowers the threshold required for permissible justifications of war and aggression. Similarly any preemptive action which is not 'reflexive' is not an action in self defence and therefore not morally justified. The ability to act preemptively to 'distant' threats falls into the category of preventive, which I intend to disqualify at length later. Walzer's legalist paradigm speaks of the inherent right of individual and collective self defence. The legalist paradigm holds that aggression justifies war of self defence by the victim "and a war of law enforcement by the victim and any other member of the international society. (Walzer, 62)." Although I agree with Walzer that sometimes third party intervention is sometimes necessary in order to assure victory over the aggressor, I feel the legalist paradigm is enormously vague and allows for the minimalization of the threshold required for permissible justifications of war and aggression. It is absolutely necessary that third party action in war be labelled preemptive. Such a title will force intense scrutiny by the international community concerning the motives of the third party before preemptive strikes occur. A more strict and focussed doctrine concerning preemption will ensure that preemptive strikes by third parties are only launched in self defence and are therefore morally permissible. First, one must reject the legalist paradigm when it argues for third party involvement in 'law enforcement'. 'Law enforcement' implies that the goal of military action by third parties is to achieve 'justice' rather than disrupt and overthrow states committing aggression. ...read more.

This differs from Walzer's "supreme emergency" for it does not allow for unjust conduct but instead prevents it. Lastly, I rejected wars of prevention. I defined preventive war as a preemptive war in which the requirement of 'extreme circumstance' is relaxed or non-existent. I argue along with Walzer that a doctrine of preventive war simply makes it far too likely that "innumerable and fruitless" wars will be launched. Conclusion Human beings are morally immune from physical assaults designed to injure or kill them. This principal is established by the legalist paradigm written by Michael Walzer. This fundamental principle of basic human rights, defined as sovereignty within the legalist paradigm, I accept. It is the violation of sovereignty and the crime of aggression which is war, and that which is fundamentally wrong. What needs to be explained is why there should be any exception to this general rule and, if so, what exactly the terms of this exception are. The explanation I provide consists of two points. First, that those engaged in efforts to harm others without justification may themselves justifiably be harmed to the extent necessary to prevent further unjustified harm. Therefore wars of self defence are justified. Second, also necessary in protecting sovereignty and crushing aggression is third party intervention. I argue that preemption by third party states is justified in extreme circumstances. First, Walzer's notion of 'Law enforcement' is rejected as being to broad and too lenient on the justifications required by a third party to commence aggression. Second, third party involvement in war must be labelled preemption. Accordingly, a third party may act preemptively, in the extreme circumstance where a victim state's sovereignty has been violated and they are unable of defending their peoples basic rights and defeating aggression. This preemptive strike I argue is in self defence and is justified. Last, I reject the notion of prevention. Preventive war legitimizes wars under conditions too close to the routinization of aggression. Preventive war simply does not count as a form of collective self defence and therefore is not justified. ...read more.