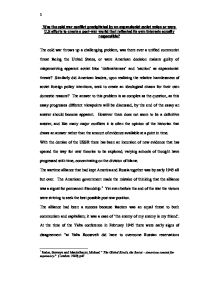 Was the cold war conflict precipitated by an expansionist soviet union or were U.S efforts to create a post-war world that reflected its own interests equally responsible?

Was the cold war conflict precipitated by an expansionist soviet union or were U.S efforts to create a post-war world that reflected its own interests equally responsible? The cold war throws up a challenging problem, was there ever a unified communist threat facing the United States, or were American decision makers guilty of misperceiving apparent soviet bloc 'defensiveness' and 'caution' as expansionist threats? Similarly did American leaders, upon realizing the relative harmlessness of soviet foreign policy intentions, seek to create an ideological chasm for their own domestic reasons? The answer to this problem is as complex as the question, as this essay progresses different viewpoints will be discussed, by the end of the essay an answer should become apparent. However there does not seem to be a definitive answer, and like many major conflicts it is often the opinion of the historian that draws an answer rather than the amount of evidence available at a point in time. With the demise of the USSR there has been an incursion of new evidence that has opened the way for new theories to be explored; varying schools of thought have progressed with time, concentrating on the division of blame. The wartime alliance that had kept America and Russia together was by early 1945 all but over. The American government made the mistake of thinking that the alliance was a signal for permanent friendship.1 Yet even before the end of the war the victors were striving to seek the best possible post war position. ...read more.

In sum the traditional view argues that the buffer zone as advocated by Stalin was in fact a cover for a communist revolution as promised by the comitern nearly thirty years ago. Douglas J Macdonald, in his work 'communist bloc expansion in the early cold war' states that "soviet bloc actions in Asia strongly suggest that had robust containment policies not been followed in Europe and the Middle East, the soviets would have tried to expand their influence into those areas also."12 Russian ideology believed that the Anglo - American alliance was the reason for the cold war, "soviet leaders were prone to view Anglo - American structures as fundamentally hostile toward Russia".13 Which leads onto the next school of thought. Beginning in the mid 1960's, largely in reaction to the Vietnam War, a revisionist school evolved amongst historians who proposed that the United States was primarily to blame for the cold war. With the belief that the American policy makers were "driven by an unreasonable hostility to communism, largely generated by domestic, political and economic needs."14 Work by Daniel Yergen (shattered peace) aims to dispel the myth of soviet expansion and instead attempts to turn the attention onto the failures of the American government. Yergen argues, "the war, which promised to bequeath a great power vacuum in Europe and at the same time erased all doubts about Russia's power and capabilities, made inevitable the emergence of the soviet union as ...read more.

The progression of history has thrown up more theories that try to explain the cold war; the realist theory, is an example of this and seems to be a continuation of the post revisionist theme with very little difference. Yet the cold war, in my opinion cannot be so easily dismissed, there has to be a point in time where the apportion of blame can be handed out. Understandably this point is hard to find. Gaddis blames the United States for the cold war; "they had vast military and economic superiority over the soviet union."23 And therefore should have known better? If the United States had such a large advantage over their supposed allies, then it can be argued that the Soviet Union saw this, and become so obsessed with achieving the same level that they inadvertently started a cold war? The revisionist view fails to change the perceived image because it suffers from a lack of true evidence proving otherwise. It is often the first explanation that holds the most truth; this is why the point in history that can be recognized as being the cause of the cold war is the Bolshevik revolution of 1917. Whether or not the Bolshevik government knew this is debateable, however blessed with knowledge or not, the over throw of the Tsar would split the world. It was only the intervention of the Second World War that prolonged the beginning of the cold war. So to end it was an expansionist soviet union that plunged the world into a cold war. ...read more.